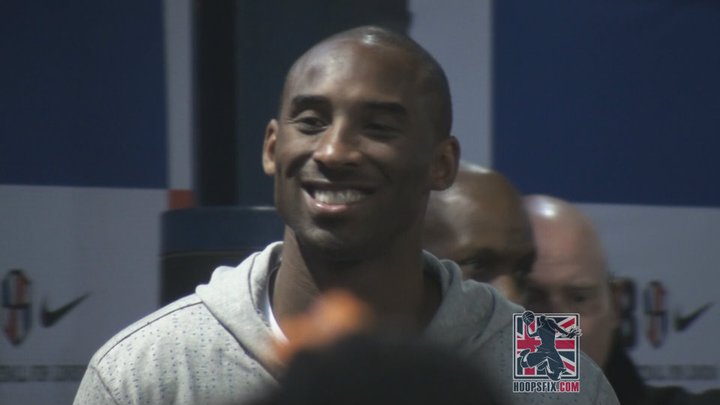 Kobe was all smiles down at the LSB launch

You’ve probably seen the video that has stolen the show, but the actual reason Kobe Bryant was in South London on Saturday night was to launch the “London School of Basketball”-a new network of coaches committed to delivering co-ordinated basketball across London whilst increasing sustainable participation in the sport.

The initiative, funded by number of different public and private sector partners including Nike, the NBA, and England Basketball will deliver open access basketball, development for boys and girls teams (Under 12’s right through to Under 20’s), access to competitive basketball leagues, youth mentoring, training and support for young people to become coaches and community sports leaders and progressive pathways to elite basketball for talented basketball players.

Kobe, as a Nike athlete, arrived at Lilian Bayliss to join 100 young players at a mini basketball camp where he oversaw them doing drills and got involved doing a bit of coaching. He also had time for a few interviews, sitting down with Greg Tanner in front of a select audience to answer questions (full video footage of that coming soon), getting on stage with a KISS FM presenter to do the same thing but in front of the 100 young ballers from the camp, as well as exclusive interviews with CNN and a few of us known as ‘verticals’-stand alone websites (I believe). See video stills of what  I filmed from the evening over on the Hoopsfix Facebook page here.

Our friends over at MVP have put together this great video profiling Kobe’s visit to the school (other Lakers practice stuff included in there as well)-check it out!