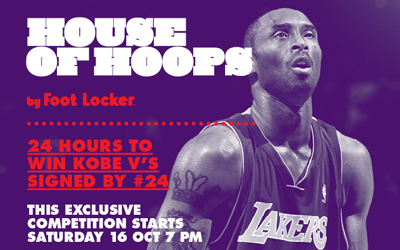 Win yourself a pair of Nike Zoom Kobe V's signed by #24 himself!

Following on from Kobe’s visit to London, Footlocker’s House of Hoops is giving away a pair of Nike Zoom Kobe V Pro Kicks signed by Kobe Bryant himself in a 24 hour competition! You can be the lucky winner of this exclusive prize if you are part of the House of Hoops Facebook family.

All you gotta do? Hit ‘Like’ on the House of Hoops London Facebook site if you haven’t already, and then keep your eye out for the update which says:

Hit the ‘Like’ button on this specific update and you’ve earned yourself a chance to win this exclusive prize.

Win a pair of signed Kobe V’s for a couple of clicks of a button?! You can’t go wrong!

The competition will officially open from this Saturday 16th October 2010 at 7pm  and will close Sunday 17th October 2010 at 7pm. The winner will be announced Monday October 18th 2010 and invited to the House of Hoops London store on Oxford Street to pick up their prize.