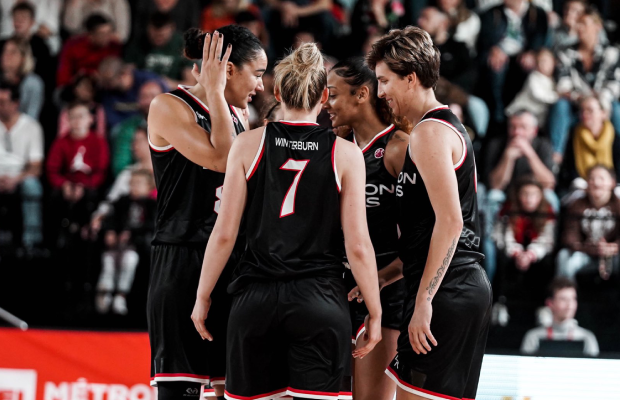 London Lions were unable to progress to the Round of 16 of EuroCup Women after a late surge from ESBVA saw the French side prevail in the second leg.

The WBBL powerhouses led by six points after last week’s victory in London and maintained the overall lead for much of the contest until a 23-11 fourth quarter sealed a 77-64 defeat on the night – losing 148-141 on aggregate.

Taylor Murray was a standout performer with 14 points, six rebounds, five assists and four steals with Kiki Herbert-Harrigan top scoring with 16 points having survived an injury scare from a week ago.

However, the Lions were undone by a relentless performance from Kennedy Burke with the WNBA player pouring in 34 points along with 10 rebounds and netting six threes in the contest.

Things didn’t get off to the best of starts as the hosts jumped out to an early 12-1 lead. But London settled with a 9-2 response capped by a Herbert-Harrigan triple and they only trailed 25-22 after 10 minutes as Holly Winterburn also netted from downtown.

Kennedy Leonard returned to action with a three off the bench at the start of the second to hand the Lions their first lead. That advantage would be protected going into half-time as an emphatic rejection from Herbert-Harrigan kept the score at 39-38 in favour of the British side.

Kat Snytsina hit a triple to push the overall gap to nine points in the tie in the third, but ESBVA beat the third quarter buzzer with a layup to lead 54-53 on the night and close the aggregate deficit.

Winterburn’s second three tied the game at 56-56 early in the final quarter, but the offence dried up as their opponents put together a pivotal 10-0 run to surge ahead on aggregate with Burke hitting two threes in the spell.

Another triple from Herbert-Harrigan cut the gap to 70-63 – just a single point overall – but Burke responded yet again and would seal the victory with a sixth effort from downtown as London’s European venture came to an end in France for the second season in a row.

They will return to domestic action against Essex Rebels this weekend with a Cup final to follow at the end of the month, but will know that was a big opportunity to make another statement and break new ground in Europe.