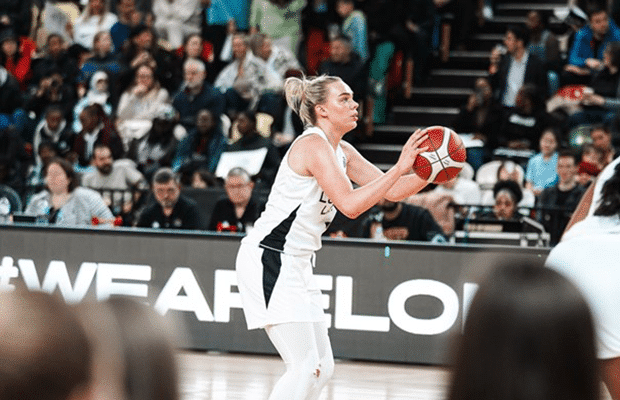 London Lions will take a six point lead into the second leg of their EuroCup Women Play-Off match up with Villeneuve d’Ascq after a 77-71 victory in front of 1000 fans at the Copper Box Arena on Thursday evening.

Boosted by the return of Paulina Hersler, the emergency of Taylor Murray in the absence of Kennedy Leonard, and a clutch performance from Kat Snytsina, Lions overturned a fourth quarter deficit to set up a thriller in France next week.

Snytsina hit a deep triple off the glass to give the Lions a 70-69 lead with just over 2 minutes to play, and after a huge block by Kiki Herbert-Harrigan at the other end, hit a tough right handed drive to give Lions a 3-point cushion down the stretch.

A Winterburn three at the buzzer rounded out the victory.

“Especially when we were down almost double digits. We were light at the guard spot and Taylor Murray was just phenomenal, playing that many minutes, she was just tremendous, big decisions at the end of the game.

“I think the most impressive thing was defensively we found an answer in the fourth quarter and turned that into points.

“We’ve just taken a really, really, good team with good players; they gave us everything they had and we came out with a win.”

The ever-dependable Herbert-Harrigan led London with 21 points before leaving in the final seconds due to injury, while Taylor Murray added 13.

Kamiah Smalls had 11 of her 18 points in the first quarter to lead Villeneuve.

The second leg will be played on Wednesday January 11 in France.