Hapoel Tel Aviv steal one from London Lions at Wembley 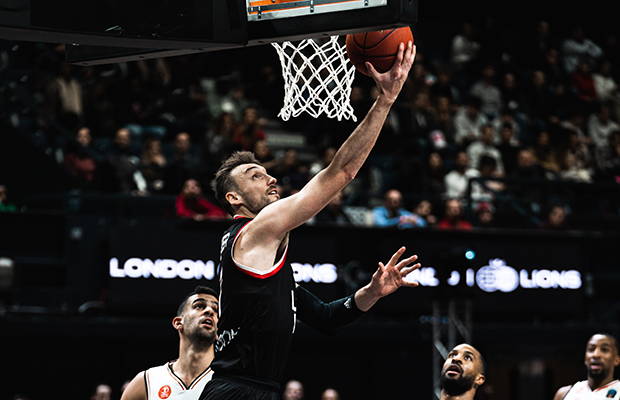 Hapoel Tel Aviv gave British basketball a glimpse into European basketball culture off the court and a clutch performance on it with a 93-95 win over London Lions in their EuroCup match-up on Wednesday night at Wembley Arena.

J’Covan Brown hit the game-winning jumper with 12.3 seconds remaining as Hapoel overturned a double digit fourth quarter deficit to send Lions to their third consecutive loss in the competition.

Lions led for the first 35 minutes of the game.

Jordan McRae was unstoppable for the visitors, registering 36 points on 13/17 shooting.

With a 3,500 ticket sell out announced the day before the game, Hapoel Tel Aviv fans were out in force outside Wembley Arena two hours before tip, drowning out any London Lions chants from start to finish of the contest.

Lions looked as they were going to avenge the 76-59 defeat in their first encounter in Israel – where Sam Dekker, who played with a chip on his shoulder in this one – suffered an ankle injury, but they gave up 24 offensive rebounds which proved to be the difference to drop to 4-6 with the defeat.

Dekker, Tomislav Zubcic and Jordan Taylor starred for the Lions, with 29 and 19 points each, respectively, as the Lions knocked down 12 three pointers but also battled foul trouble.

“I thought our guys played well, competed, at the end of the day that’s a talented team they got guys that can put up big points, I’ll be honest it’s a tough when you got four guards getting into foul trouble, I thought the whistle was a quick tonight to be blunt, it’s tough to get a rhythm.

“I think their depth wore us out at the end…We know every single night in this competition is gonna be tough, every team is really talented including these guys, hats off to them, they’re a really good team, they’re well coached and they made plays down the stretch when they needed to.”

A big run in the third gave the Lions their biggest lead of the game at 14, reduced to 10 heading into the final period before a furious fourth quarter Hapoel rally set up a thrilling finish.