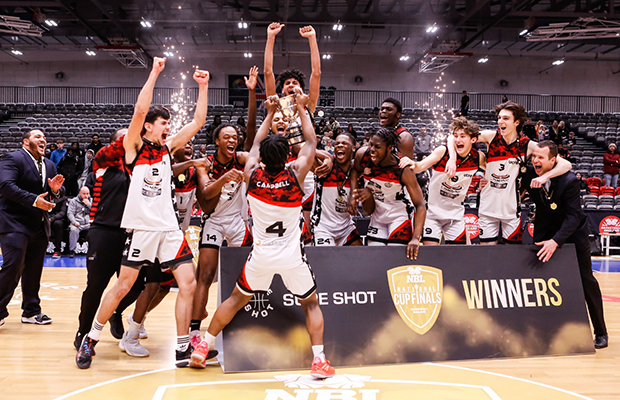 London Elite claimed the 2022 Under-18 Boys National Cup title with a 70-53 win over London Legends on Saturday afternoon at the NBPC.

Fast-rising guard Liam Campbell picked up MVP honours after registering a 17-point, 13-rebound and six assist effort, leading London Elite to their first ever national title at any age group.

“Legends are one of the best programmes in the country who produce top level players so we knew it was gonna be slugfest,” London Elite Head Coach Kieran Matthews told BE after the game.

“…We’ve got guys on our team who are just as hungry as anyone else, and as a programme and team they came together for us.”

Hunter Kelleher was a force inside with 16 points and 18 rebounds, while Mudathir Bashir joined them in double figures with 12 points.

Elite dominated the glass, with 37 offensive rebounds, holding off a furious rally from Legends who reduced a double digit deficit to just two points late in the third before eventually succumbing.

Johnrey Pangilinan had 17 points to lead the Legends in scoring, with Andre Bonnick having 12 points, 13 rebounds and six blocks.