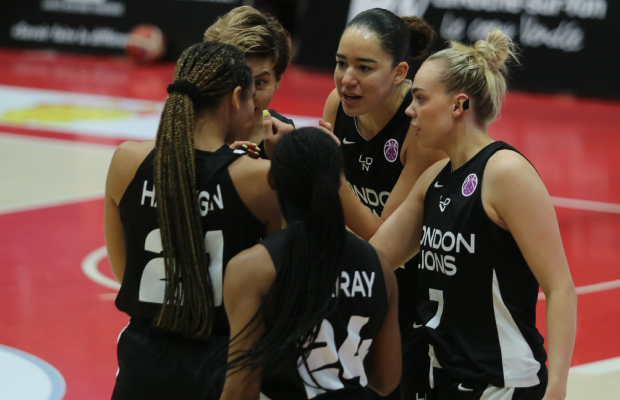 London Lions are heading back to the playoffs for the second season running in EuroCup Women action, despite a dramatic 76-75 defeat to Roche Vendee, on Wednesday.

Mark Clark’s side are assured of a top-two finish in Group J after ESBVA’s win meant the Lions will finish second given they hold the head-to-head over Roche Vendee having won the first meeting by 11.

Holly Winterburn was sent to the line for three free throws in the final seconds as London had rallied from a 24-point deficit, but the GB star purposely missed the last attempt in an effort to snatch a win rather than head to overtime where they could have potentially lost by more.

The Lions gave up 54 points in the first half as they struggled to contain their opponents on their way to trailing by as many as 24 points.

It was their defence that helped spark their revival as they held the French side to just 10 points in the third with Snytsina and Herbert-Harrigan with two triples apiece in the quarter.

The gap was down to single figures when Azania Stewart and Winterburn opened the fourth before the hosts restored a commanding cushion at 75-63. Kennedy Leonard hit a big three in the midst of a 10-0 run before almost winning the game late on.

Last season, the Lions were the final team to qualify for the playoffs meaning they were drawn to face top ranked side – and eventual winners – Bourges; winning a historic first leg before ultimately losing on aggregate.

Victory at home to Sassari next week at the Copper Box would take the Lions to four wins and boost their chances of being inside the top 16 for the playoffs and home advantage for the second leg.