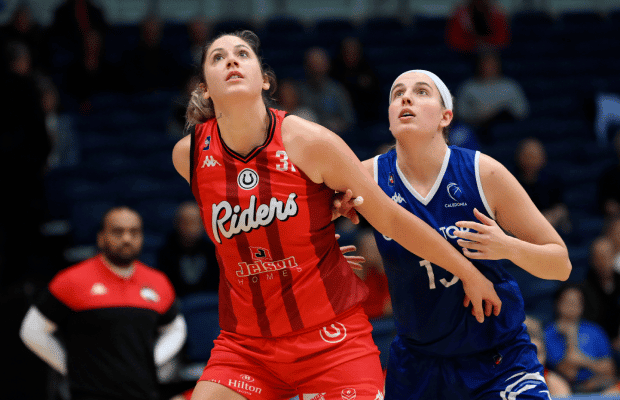 The 2022-23 WBBL season has now completed its first full month and it’s already been an eventful start to the campaign.

Just one unbeaten record remains in the league – and no prizes for guessing who – and it’s time to start up this feature to check in on how the teams are getting on across the WBBL with updates to follow every couple of weeks.

Business as usual for the Lions as they look to repeat their historic undefeated season. They have already beaten three of their expected closest challengers in Sevenoaks, Leicester and Sheffield – all by double digit margins – whilst beginning their second season in EuroCup Women last week in France.

Kiki Herbert-Harrigan is backing up the expectation of a leading MVP contender with averages of 19.5 points per game with 57% three-point shooting through four games. The Lions don’t currently have a WBBL game scheduled until mid-December but a WBBL Cup quarter-final is pending against Sheffield, whilst they continue their European venture with all three home games at Crystal Palace.

🦁 @2121Mikiah fired in a game-high of 29 PTS to help lead @londonlionsw to a 4-0 start in league play! pic.twitter.com/dD0dHhNDNs

They may not currently sit second in the league standings, but Sheffield look more than capable of leading the chasing pack this season. The Hatters brushed aside Oaklands by 81 and Durham by 54 in their first two games before recovering from an early 15-point deficit against Newcastle to win by a further 47 points.

Their fourth consecutive home game pitted them against the Lions and despite bright spells, they were eventually beaten 82-92. Sheffield have a deep roster at their disposal with a strong British core strengthened by the arrivals of Karly Murphy, Lena Niang and Bre Hampton-Bey and have another big test with their first game on the road against Sevenoaks.

The Riders have made a strong start to the season with four wins from their opening five games with a 16-point loss at the hands of London in between. Ashley Arlen has looked at home upon a return to the league with a near double-double average, while Oliana Squires has impressed with 19.2 points per game.

Krumesh Patel’s side opened with big wins over Essex and Manchester before bouncing back from their first loss with a comeback triumph on the road against previously unbeaten Caledonia. They moved to 4-1 last weekend with an emphatic home victory over Cardiff to extend their winning run in the matchup to 25 games.

Caledonia could quite easily be sat at the top of the WBBL Championship table with a perfect 5-0 record. The Gladiators led by 16 points against Leicester – having beaten Sevenoaks 71-61 less than 24 hours earlier – only to lose by three points in their only blemish in a strong start to the season.

Rookie Erin Jones has made an instant impact with 14.6 points and 9.0 rebounds per game – just behind GB veteran Chantelle Handy in the scoring department. The club recorded an emphatic home win against Newcastle in their opener and also enjoyed a dramatic triumph over Cardiff in the first round of the Cup.

It’s difficult to read too much into Sevenoaks’ start to the season. This is officially the post Cat Carr era after the Suns legend retired and they are still waiting on Brittany Hodges’ return from injury as part of their new trio of Americans. An opening defeat to London was perhaps expected and they also came unstuck on the road against an in-form Caledonia side as they drop to .500.

Renee Busch has stepped up as the team’s leading scorer early on with Janice Monakana temporarily stepping out of retirement with a 29-point haul coming in the home win over Newcastle. Araion Bradshaw has made a steady start as the team’s new point guard and the Suns look to get back on track by overcoming Sheffield this weekend in an intriguing encounter.

Cardiff saw their unbeaten start to the regular season come to a crashing halt at the weekend as they were beaten – once again – by Leicester in a 33-point defeat. They began with victories over Manchester, Essex and Durham to jump out to 3-0, whilst also losing a heartbreaker in the Cup at Caledonia.

The dynamic duo of Lauren Saiki and Shannon Hatch is still as productive as ever, while rising star Issy Bunyan’s impact continues to grow for the Archers. The club has not made the playoffs since 2018, but have an encouraging platform to build from as they next face Oaklands on the road the following weekend.

Something of an inconsistent start for the Wildcats so far, which was a theme of last season’s campaign. They have some key pieces back and have added Kayla Shaw, who looks capable of picking up the loss in scoring from Brooklyn Pannell’s departure, while Brahe Ashton is second in the league in assists having dished out 17 in a win against Oaklands.

Kenrick Liburd’s side were beaten by Newcastle in their opener before bouncing back against Manchester after a late surge, while successive wins over the Wolves were followed by a heavy loss away at Caledonia to drop to 2-2 in the league with a Cup quarter-final next in the schedule.

The Rebels also finally got off the mark (officially) last weekend when they defeated Durham 75-63 to halt a run of three straight defeats to open the regular season. They have added Daniela Turner to newcomers Sune Swart and Alexa Naessens, while the all-round displays of Tia Freeman have stood out early on.

Essex also moved onto the quarter-finals of the Cup when Newcastle pulled out and they face a repeat matchup with Durham with a golden opportunity to make it through to the last four. First, they make a visit to Newcastle for a testing league encounter with a chance to make it back-to-back wins.

There were times last season when Newcastle were barely able to string a team together (including the WBBL Cup final) and they have already been forced to forfeit from the Cup after being struck by injuries. Their only win came at home to Nottingham, but they have also suffered three league defeats in another slow start.

They saw strong showings from Katie Nolan – 16.7 points and 16.7 rebounds per game – before adding Antoinette Lewis to form an imposing frontcourt that also includes Chloe Gaynor. The Eagles have also signed American guard Maggie Justinak and will now just want to have all of their pieces together on the floor moving forward with a big home game against Essex up next this weekend.

Three games in, and Oaklands had lost by 91, 72 and 81 against three of the best sides in the league – things looked bleak in the midst of a difficult challenge for their academy players. Reinforcements have arrived from down under and the trio of Cassidy Gould, Grace George and ex-Manchester and Newcastle sharpshooter Jorjah Smith have taking on the bulk of responsibility.

They were much more competitive in successive defeats to Nottingham in Cup and league action before ending their losing streak with a 65-72 triumph in Manchester on Saturday. Gould top scored with 29 points in the win with George adding 25 points and 12 rebounds as they now have something to build upon.

Will they be playing? Won’t they? Nobody really knew because of the non-existent communication from the club and league, but Durham finally made their first appearance in the WBBL Cup after multiple postponements. Matt Newby appeared on the sidelines and the Palatinates impressed in beating Manchester with the returning Elle Hendershot and Goretti Hurtado standing out alongside Inma Bautista.

Since then, Durham have dropped their opening three games in the league with defeats coming against Sheffield, Cardiff and Essex. They don’t have the depth that a lot of teams do (or at least not yet) and they next face an in-form Leicester side with three of their next five scheduled games at home.

It’s been a challenging start in the new era for the Mystics with Marg Jones still awaiting a first win with the club. They had to wait for a couple of late arrivals and have been without Abby Niehues for the past couple of games with experienced guard Claire Abbott joining the newcomer on the sidelines.

Leah McDerment leads the team in scoring with 15.3 points per game including a WBBL best of 21 in their seven-point loss at home to Oaklands. They previously held an eight-point lead in the fourth quarter away at Nottingham before being outscored 18-4 in a costly closing spell and now have a break before their next outing.