London Lions fall to defeat against Podgorica in EuroCup - Hoopsfix.com

London Lions fall to defeat against Podgorica in EuroCup 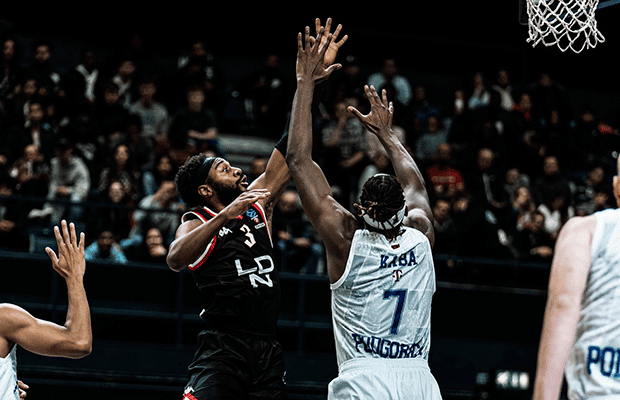 London Lions fell to 1-3 in their EuroCup campaign with a 76-87 loss to Buducnost VOLI Podgorica on Tuesday evening at Wembley Arena in London.

The return of Sam Dekker to the line up would not be enough for the Lions, who struggled defensively and went just 2-of-15 from three point range in a new home venue due to the Copper Box being booked out.

Lions trailed by as many as 20 and a furious late rally would not prove to be enough to prevent them from a defeat at home.

Dekker led four players in double digits for London with 15 points, while Ovie Soko and Aaron Best had 13 points apiece.

Bell-Haynes had 8 points in the first 5 minutes, as Bud jumped out to a 20-8 lead – opening up four of four from behind the arc.

Buducnost led 29-15 after the opening quarter, as Kaba reached double digits (11) without a miss on 5-of-5 shooting.

Podgorica continued to move the ball beautifully – they registered 13 first half assists – as they shot 62.8% in the half, pulling apart the Lions defence.

Lions got caught sleeping as a full court touchdown pass from Edin Atic to Petar Popovic with for the lay up to beat the halftime buzzer that gave Podgorica a 53-39 lead at the break.

Some better defensive possessions in the third saw Lions slowly start clawing back. Aaron Best got going with back to back baskets in the final 1:16, punctuated by a 3-point play that saw Lions get it back to single digits, 60-69, heading into the final period.

The two teams traded buckets in the fourth, as Lions went to Zubcic early. A Sam Dekker lob to Josh Sharma saw the Lions pull it back to 7 points with 3 minutes remaining to keep their hopes alive, before another rally in the final minute to get within 6, but missed free throws and open 3-point attempts would ultimately seal their fate.