London Lions bounce back in EuroCup Women for first win 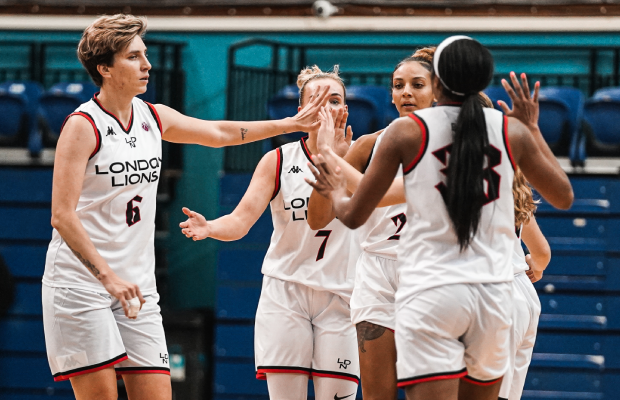 London Lions bounced back from an opening loss in the EuroCup Women regular season as they defeated Roche Vendee 90-79 at Crystal Palace, on Thursday evening.

Mark Clark’s side faced French opposition for the second week running, but returned to winning ways in the competition behind a strong third quarter to improve to 1-1 in Group J.

Ty Battle scored London’s first six points of the game and they used a 7-0 run to move 13-6 ahead. Their lead hit eight points when Kennedy Leonard came off the bench to sink a pair of free throws with the hosts 19-13 in front after 10 minutes.

The Lions were 32-23 ahead when Katsiaryna Snytsina hit a triple in the second period, but the visitors responded with a 16-6 spell to take the lead with the two sides going in level at the break at 43-43.

Winterburn began to take over at the start of the third with plays on both sides of the floor as London seized control. They saw big and-1 finishes from Herbert-Harrigan and Taylor Murray in the midst of establishing a double-digit cushion with Winterburn making it 68-56 from beyond the arc.

The gap peaked at 14 points in the fourth and while Roche Vendee did reduce the deficit to single figures, London kept their composure and were rarely troubled as they closed out an important victory.

London are back on the road next week when they head to Italy to take on Sassari (0-2) in another important clash in the group.