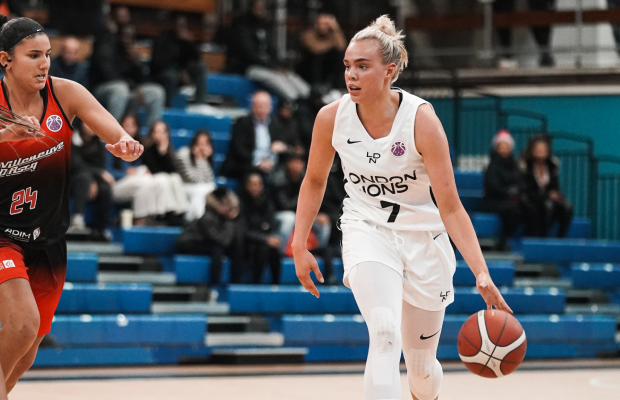 London Lions made it three straight wins in EuroCup Women action as they defeated previously unbeaten French side ESBVA 67-60 at Crystal Palace, on Thursday.

Mark Clark’s side take a major step towards qualifying for the playoffs with a 3-1 record in the group with two games to play in the regular season.

Kiki Herbert-Harrigan provided the usual scoring punch in an intense encounter with a game-high 20 points, while Holly Winterburn contributed an all-round effort of 16 points, six rebounds and nine assists.

London made their move with a pivotal stretch in the fourth with a 9-0 run capped by a triple from Winterburn as they opened up a 56-49 advantage.

Kennedy Leonard returned to the starting lineup with nine assists off the back of a recall to the GB Senior team, while Katsiaryna Syntsina – who recently passed 1000 points in the competition – also impressed with 10 points, five rebounds and four steals with a calming influence.

The hosts had been down by as many as seven points in the contest, but unlike the first meeting in France, they kept it together and a strong defensive third kept their opponents to just 11 points to set up an exciting finale.

The Lions now control their fate with two games to follow against Roche Vendee on the road before hosting Dinamo Sassari back at Crystal Palace. A chance to finish 5-1 in the group would secure a high seeding going into the playoffs having been the last team to qualify last season.