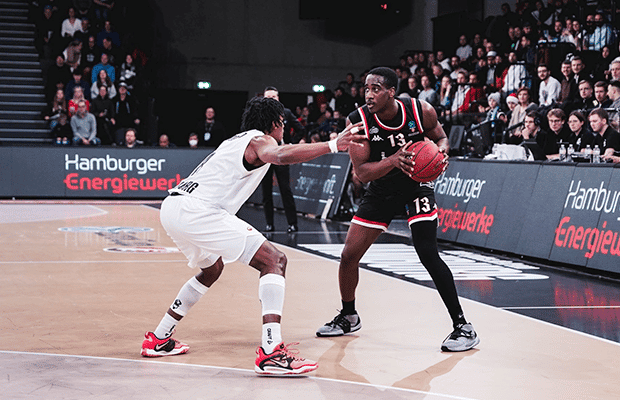 London Lions managed to secure their second win of the 7DAYS EuroCup season and the first ever in their history away from home, routing Veolia Hamburg Towers in Germany, 75-103.

It marked the first time a British side has won away in the competition since January 2004 when Brighton Bears won in Lithuania against Lietuvos Rytas.

The Lions did it in emphatic fashion, with a number of highlight plays as they shot 61.6% from the field and registered 27 assists.

“I was proud of our guys and their effort on both sides of the ball,” Lions Head Coach Ryan Schmidt said after the game.

“We know we had been underperforming going into this, coming off the FIBA break, we really dove into a lot of things and had a real training camp. For us, it was a unique pre-season with five guys at EuroBasket so we didn’t have chance to build from scratch, so we decided this was the time to do it and it really showed.

“Our guys did a good job of doing things together, defensively and offensively, offensively sharing the ball; we had 27 assists, which is a season-high for us, and defensively and really proud of the effort from everyone that came into the game and contributed.”

Tomislav Zubic led the London scoring with 22 points as 5 players reached double figures for the road team. Sam Dekker had 19 points and Kosta Koufos had 18 on 9/11 shooting, while Vojtech Hruban went 4/4 from three on his way to 16 points without a miss.

New signing Miye Oni had 5 points, 6 assists and 4 steals in his debut.

Lucas Meisner and Yoeli Childs had 19 each for Hamburg.