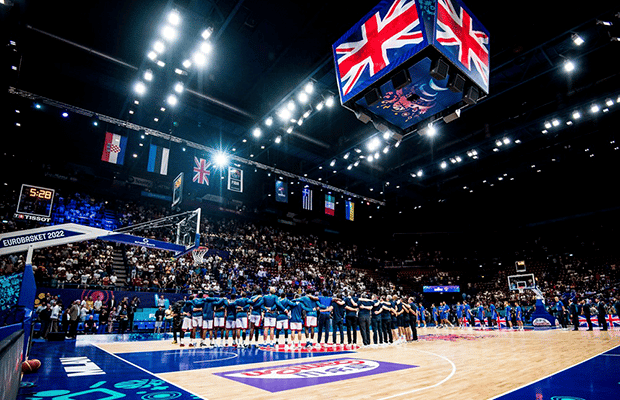 Great Britain Men’s National Team Head Coach Marc Steutel has confirmed the 24-man roster for the upcoming FIBA World Cup Qualifiers against Serbia and Latvia, with some new faces plus a new assistant.`

Amin Adamu, Quinn Ellis, Kayne Henry, Aaron Menzies and Josh Sharma all selected and looking for their first senior caps if they make the 12, whilst Gareth Murray joins Steutel on the sidelines in his first outing as assistant coach.

Meanwhile, the window will act as a transition of sorts for GB – the first time since 2008 without former captain Dan Clark named on the squad* after announcing his retirement after EuroBasket, and is now the General Manager of the squad.

No less than six London Lions players have been named to the squad.

The National Team will take to the court at Newcastle’s Vertu Motors Arena on November 11th to face Serbia before travelling to Riga to face the Latvians on November 14th as Steutel and his staff look to lead the team to the 2023 Basketball World Cup.

Great Britain have already made national team history by reaching the Second Qualifying Round for the first time ever and are vying for one of the top three positions in Group I which would see them advance to the final tournament in Indonesia, Japan and the Philippines next summer.

“We’ve got a monumental task ahead of us against two basketball powerhouses,” GB Head Coach Marc Steutel commented.

“But this is why we compete and there were a lot of positives for us from our last qualifier against Latvia, including our defensive application, how we stuck to the scout and the game plan. We’ve just got to embody all of those things again and work towards the outcome that we desire from these games.

“Any time you’re selected to represent this team, especially against a powerhouse like Serbia, it is very exciting, and to go up against Latvia again in Riga will be something to look forward to.

“We’ve created a great family environment in camp between the players and staff and it is a really special feeling to be a part of this group, so I can’t wait to bring us all back together and start trying to build something again over the coming months.”

You can get your tickets for Great Britain’s showdown with Serbia at the Vertu Motors Arena on November 11th via the Newcastle Eagles Box Office now.