GB blown out at hands of Ukraine in EuroBasket opener - Hoopsfix.com

GB blown out at hands of Ukraine in EuroBasket opener 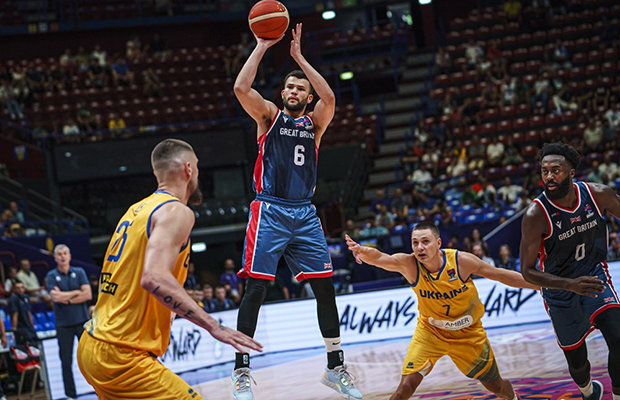 Great Britain were given a baptism of fire in their EuroBasket opener with a 90-61 defeat at the hands of Ukraine in Milan, Italy on Friday afternoon.

GB held their only lead at 3-2 in the opening minute of the game before chasing from the backfoot the rest of the way. The Ukraine lead ballooned to as many 28 in the game (and eventually 29 for the final deficit), using a 24-12 third quarter to put it completely out of reach and seal GB’s fate.

Luke Nelson looked was the only credible offensive threat for GB – who are without regulars Tarik Phillip and Teddy Okereafor due to injury – as he finished with 16 points, while Myles Hesson and Gabe Olaseni joined him in double digits with 10 each.

Svi Mykhailiuk had the hot hand for Ukraine, having 9 of his 17 points in the first quarter, while fellow NBA-er Alex Len finished with 13 points.

GB captain Dan Clark was not happy with the team’s performance.

“They were a much better team on the day,” he said in the post-game press conference. “We’re very unhappy with the performance we put in today. From the jump ball we didn’t have the right intensity, the right focus, and that showed. Ukraine were very prepared for our strong points and we weren’t able to deal with that and the game got away from us. We hope to be better tomorrow.”

“I think early on in the game, we just didn’t capitalise on simple pass and catch opportunities and finishing at the rim and that was tough. As the game wore on, Ukraine’s pressure took us out of a lot of things we do. When you’re giving up 24 points off turnovers it’s hard to overcome. We have to reset and come back tomorrow.’

GB have little time to rest as they will look to bounce back against Croatia on Saturday at 13:15 (available to watch through Courtside 1891).

Ukraine quickly jumped out to a 17-7 lead in the first 4:30 using the duo of Len and Mykhailiuk, knocking down three of their first four 3-pointers and 6-of-8 overall as they got out in transition to little resistance.

Olaseni knocked down a 15 foot in the dying seconds as GB trailed 22-17 after the opening period.

An 8-0 run in the second quarter saw GB prevent the game getting out of hand, but were down 42-32 at halftime, despite 11 points from Luke Nelson.

With points difference mattering, GB knew every point mattered but it was in the third Ukraine showed their dominance, finishing the quarter on a 10-0 run sparked by Vyacheslav Bobrov to lead 66-44 heading into the final period.

From there, it was cruise control for Ukraine, as all 12 GB players saw the floor to close out the game.