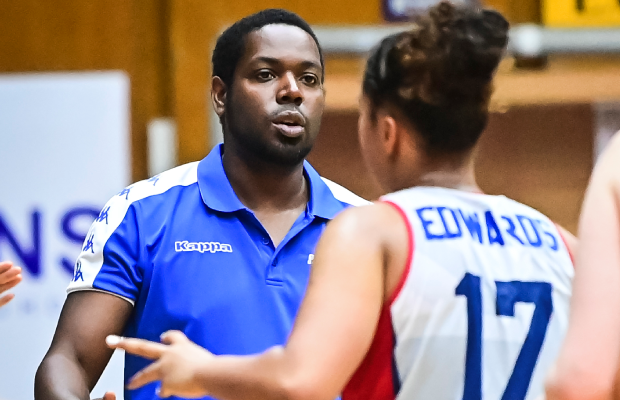 Great Britain’s Under-18s dropped to 1-3 at the FIBA U18 Women’s European Championship as Portugal pulled clear in the third quarter to inflict a 67-49 defeat.

It was only a one-point game at half-time, but GB were unable to sustain their effort against the unbeaten Group A winners as they now drop into the 9-18 Classification groups with promotion on hold for another summer.

Leia Edwards posted a second double-double of the tournament with 21 points and 10 rebounds with Fatmata Janneh coming off the bench to add 11 points and nine boards.

Edwards opened the scoring with a tough finish inside, but GB failed to trouble the scorers for the next seven minutes as they struggled to penetrate the Portuguese defence. Fortunately, their own defence was holding up at the other end as they only conceded six points in that duration and soon levelled through Janneh and Edwards.

Both sides were down at 23% shooting through the first quarter as Portugal edged ahead in a low-scoring period at 11-9.

GB briefly moved in front through Welsh compatriots Issy Bunyan and Carys Roy before their opponents responded with an 8-0 run. They remained aggressive in attacking the basket and found success from the foul line with over half of their points coming from free throws as they cut the gap to 24-23.

GB were 5-of-20 from inside the arc – having also not made a three-pointer – whilst being 13-of-20 from the foul line as they drew 13 fouls from their opponents in the first half.

Edwards put GB into the lead with a tough and-1 early in the third, only for Portugal to immediately answer with one of their own to spark a dominant 19-2 spell. The gap grew to 18 points as GB trailed 51-33 heading into the final quarter.

GB opened the fourth with seven unanswered points, capped by a corner three from Liv Forster, but they couldn’t reduce their arrears back into single figures as Portugal finished strong in the win.

– GB finish Group A with a 1-3 record
– They will next play in the 9-18 Classification group
– GB starters remained Charity, Januszewska, Bunyan, Edwards & Roy
– GB shot 26% from the field with 2-of-12 from 3PT
– They converted 19 of 29 free throw attempts and had 22 turnovers