GB Under-18 Men brushed aside by Turkey in Round of 16 - Hoopsfix.com 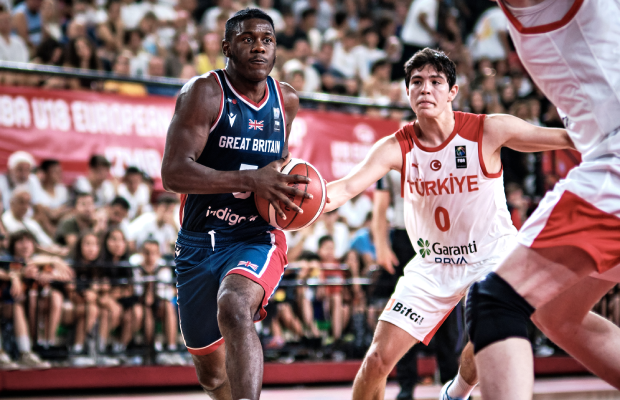 Great Britain’s Under-18s face a fight for survival in Division A of the FIBA U18 European Championship after losing 82-38 against hosts Turkey in the Round of 16, on Wednesday.

Craig Nicol’s side came up second best against stronger opposition and now drop into the 9-16 Classification Round with the bottom two teams being relegated to Division B.

Latrell Davis finished with 14 points and seven rebounds as the only GB player in double figures.

The writing was on the wall early on in front of a packed arena as Turkey jumped out to a 21-4 start. GB stemmed the flow somewhat as they put together a 10-2 run as Louie Tucker’s putback at the end of the first quarter was followed by a three-pointer from Nedas Cholevinskas.

Turkey quickly restored complete control with a further 18-4 spell propelling them to a commanding 41-18 lead at the half-time break. The lead continued to grow in a 15-4 start to the third and GB soon found themselves trailing by 40+.

Matt Goodwin and Lane Campbell hit triples in a low-scoring fourth as GB now quickly turn their focus to their next game.

GB will face Czech Republic on Thursday afternoon at 6:30pm UK time with victory confirming their Division A status for another summer, while defeat would put them in danger of relegation.