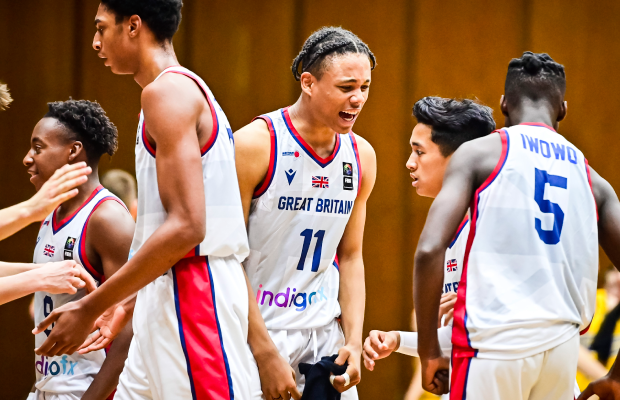 Great Britain’s Under-16s missed out on the quarter-finals at the FIBA U16 European Championship, Division B after finishing with a 2-2 record in the group phase in Sofia, Bulgaria.

Troy Culley’s side started their campaign with victory over Norway on the second day of the tournament, but back-to-back defeats dented their hopes of advancing before picking up a second win.

Here’s a look back at their games in Group C:

GB clawed their way to a 51-48 opening win as they held on to beat Norway. Marcus Robinson starred with a game-high 22 points including six three-pointers as the only player in double figures for the victors.

GB were held to just six points in the opening quarter before a couple of Robinson triples got them going in the second. They trailed by as many as nine points midway through the third, but put together a 14-4 run to take the lead with Robinson continuing to fire from outside.

Sampson Onouha joined in with a three of his own in a further 8-0 run and a late score from Aymen Kraria was enough to seal the win.

GB were unable to make it two from two in Sofia as they fell to an 80-70 defeat against eventual Group C winners Bosnia and Herzegovina.

Robinson top scored again with 19 points with Kofi Asare adding a double-double of 13 points and 13 rebounds in defeat.

GB kept pace with their opponents in the first half and Robinson beat the buzzer to put his side 38-37 ahead going into the break. They were five points in front midway through the third before a 16-3 spell changed the game and Bosnia and Herzegovina pulled clear.

GB returned to action following the rest day with a crucial encounter against Sweden, but came up short in a 64-59 defeat. Coach Culley’s side were a single point behind with 2:57 remaining as they were then held scoreless down the stretch.

Asare produced an incredible statline with a near triple-double of 16 points, 13 rebounds and NINE blocks with Robinson just behind in scoring with 15 points.

GB started brightly to lead 17-8 inside the first quarter with Harry Godwin making plays at both ends. However, Sweden responded to storm ahead going into half-time and a close battle ensued in the second half. The lead continued to change hands with GB ahead for the final time at 57-56.

GB did what they had to do in beating Portugal 59-52 in their final group game, but it was not enough to advance as Sweden later won to claim second spot.

Derelle Desire led the way with 16 points and 15 rebounds with Asare adding a double-double of 12 points and 14 rebounds as well as six blocks and Robinson netted 12 points.

GB edged a low-scoring opening quarter, but found themselves trailing at half-time after being held to single figures in the second. There was not much between the two teams until GB used a 9-2 run in the fourth to move into a double-digit advantage and that proved decisive.

Their next game will take place on Thursday as GB face Ukraine in the 9-16 Classification Round.