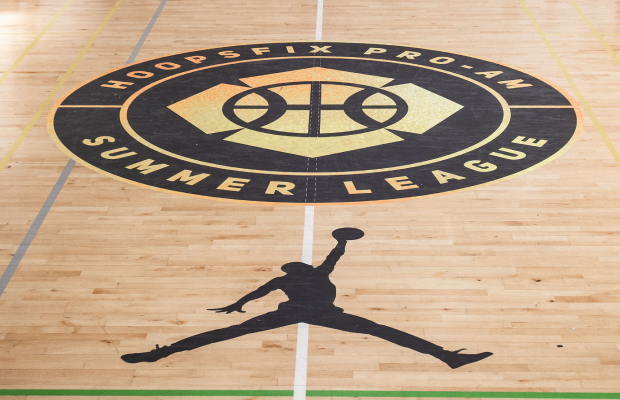 Five weeks of action in the inaugural Hoopsfix Pro-Am will conclude on Saturday as two champions will be crowned at the City of London Academy, in London.

Several international players have suited up in the tournament along with players returning from seasons in Europe and college in the US as well as young talent stepping up against elite pros.

The women’s competition sees the unbeaten Team Emerald take on Team Sapphire, while the Glacier Boys and London United go head-to-head for the men’s title.

Team Emerald have four wins from four to their name so far, and one more will see them crowned inaugural champions. They defeated Team Sapphire by 23 points back in Week 1, but can expect stronger opposition this time around.

Team Sapphire bounced back to record three successive victories including going back-to-back over Team Diamond with strong showings from Melita Emanuel-Carr and Isi Ozzy-Momodu. After their dominant opening win, Team Emerald have to grind out victories with Jessica Baksh, Chantel Charles and Beth Sarson all coming up with clutch moments in the past three weeks.

Jenelle Grant has been one of the leading performers for Team Emerald having shown no apparent signs of rust following a break from competitive action. Pending pro Gabby Nikitinaite adds scoring firepower, while Chantel Charles returns after netting the aforementioned game-winner on a previous appearance.

Emanuel-Carr dropped a light 21 points to help Team Sapphire advance in Week 3 and is set to be joined by another GB international with Holly Winterburn making a debut. Elisha Moore and Batoul Khaleefa have been ever-presents for the team across the five weeks as Team Sapphire look to capture the title.

There will also be the added subplot of a CoLA battle with Team Emerald’s Emily O’Connell and Molly Lavin going up against Team Sapphire’s Funmi Amode and Ozzy-Momodu as they compete on their home floor for the final time.

Views from both sides:

“The Hoopsfix Pro-Am has been a successful summer league that provides top level basketball. I’m excited for this event to continue in the future.

“The final is going to be a good one, we played Sapphire in the very first game and they have been looking very strong since especially in their past couple of games. However, we have also been playing very well and have been able to finish strong in all our previous games, so I believe we are able to get the win.” – Emerald’s Zoe Willis.

“It’s been so fun playing in the Pro-Am with so much individual talent and competition. I’m really excited to play in the final with my team – it’s all about us focusing on what we can control which is how hard we play to get the dub.” – Sapphire’s Funmi Amode.

Both sides come into the final with one loss to their name, but produced impressive displays in last week’s semi-finals. London United defeated Pool A winners Thames Valley Cavaliers 63-52 as Peter Turay dropped 26 points, while Glacier Boys came out on top against previously undefeated Run & Jump with an all-round effort helping secure a 64-52 success.

Glacier Boys opened the tournament with back-to-back double-digit wins over CoLA and Hoopspace before a surprise 13-point loss at the hands of TVC in Week 3 saw them drop into second place courtesy of a three-way tie. Meanwhile, London United advanced with a 1-2 record as their 11-point win over Worthing Thunder proving decisive in an eventual tie-breaker for second spot having also lost by 17 against Run & Jump.

GB internationals Carl Wheatle and Rob Gilchrist are both set to return to boost Glacier Boys in their attempt to win the title under the watchful eye of Rikki Broadmore. The team is filled with talent from across the BBL with incoming Cheshire Phoenix signing Danny Evans and Barking Abbey’s Flynn Boardman-Raffet also impressing.

London United’s Jack Majewski has relied on a youthful roster with Turay and Romario Spence the standout performers for the team. Turay is averaging 20 points per game across three appearances, while Spence had a huge showing in the Week 2 victory over Worthing and the duo are set to be joined by Tomiwa Sulaiman, who returns from the States.

Views from both sides:

“Playing in the Hoopsfix Pro-Am has been an amazing experience. It has been great to play in such a well organised event over the summer. I hope that this event happens every summer so all the British players get the opportunity to come home and play against each other.” – Glacier Boys’ Flynn Boardman-Raffet.

“I want to thank Hoopsfix for the opportunity to have something like this to play in the summer, especially against great British competition. I’m looking forward to a good game against Glacier Boys [in the final].” – London United’s Peter Turay.

Week 5 maintains a six-game slate with the other teams competing for placing with the full list of streams and rosters available, HERE.