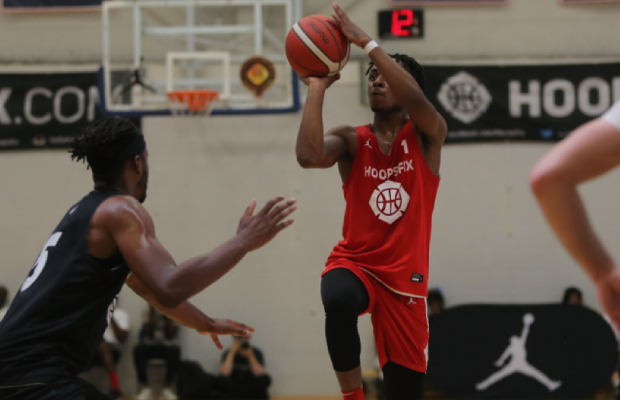 Glacier Boys will meet London United in next week’s title showdown at the inaugural Men’s Hoopsfix Pro-Am after winning their semi-final contests at the City of London Academy, on Saturday.

Here’s a recap of the Week 4 action:

Glacier Boys secured their spot in the final with an impressive 64-52 win over previously unbeaten Run & Jump behind an all-round team performance. Flynn Boardman-Raffet top scored with 14 points in the win with Bradley Kaboza and Deji Adekunle adding 11 and 10 points, respectively.

Amin Adamu led Run & Jump with a game-high 17 points as they had wiped out a double-digit deficit in the third to cut the gap down to just two points. Boardman-Raffet hit a three to end the third to make it 49-44 in favour of the Glacier Boys and they pulled clear in the fourth to take the comfortable victory.

London United then set up a showdown with Glacier Boys with a strong performance to beat Thames Valley Cavaliers 63-52 behind 26 points from Peter Turay.

They gradually pulled away as they established a double-digit advantage in the third and never let up with Turay putting the finishing touches on the win in the final period. Victor Olarerin had the crowd off their feet with one of the plays of the day in the fourth, but TVC were second best and missed out on a spot in the final.

Worthing Thunder ran out convincing 79-54 winners over CoLA to open the Week 4 action as Orlan Jackman led the way with 16 points, seven rebounds and two assists in the win. Hafeez Abdul also added a quickfire 15 points off the bench with six players in total in double figures as Thunder took control with a 26-13 opening quarter.

Elite Bulldogs edged out Hoopspace with a 50-49 success in the next game as Patrick Lanipekun converted a pair of free throws for the lead late in the fourth to finish with a team-high 14 points. Ola Ayodele top scored on Pro-Am debut with 10 points in defeat for Hoopspace as they now aim to avoid a last-placed finish next week.

Re-watch the Week 4 action below: