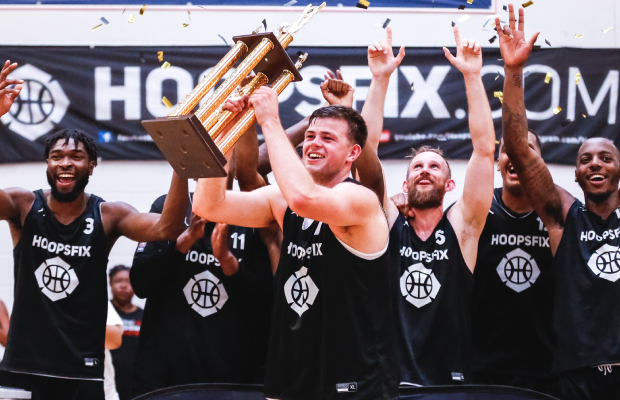 Glacier Boys dominated the fourth quarter on their way to beating London United 63-58 to be crowned inaugural Hoopsfix Pro-Am.

Bradley Kaboza delivered a clutch four-point play late in the fourth before Carl Wheatle and Flynn Boardman-Raffet came up with important baskets to help ice the win.

Glacier Boys jumped out to an 8-2 start before London United responded as Romario Spence netted a couple of triples to put his side 13-10 ahead after 10 minutes. Joe Hart’s three sparked a 6-0 close to the half as Glacier Boys moved back ahead at 26-22.

However, a 35-29 advantage soon became a 35-42 deficit as the trio of Spence, Tomiwa Sulaiman and Peter Turay combined in a 13-0 burst to put London United on course for the title. Glacier Boys found an answer in the fourth and re-took the lead at 50-47 on a Kaboza three before the Lions breakout star came up with a huge play to highlight the strong finish.

Sulaiman posted a double-double of 16 points and 13 rebounds, while tournament MVP Turay finished with 10 points and seven rebounds in defeat.

The tournament adopted a running clock with no free throws until the final two minutes of the fourth quarter across the five weeks.

Kyle Carey and Josh Apple top scored for Run & Jump with 15 points apiece with Brandon Tchouya adding 14 points as they had led by as many as 10 points.

Worthing Thunder made it back-to-back wins to finish in 5th place as they defeated Elite Bulldogs 69-61 with Lovell Cook top scoring with a game-high 18 points. Hafeez Abdul and Orlan Jackman were also both in double figures, while Andre Arissol had a 9-6-6 statline and there was a tournament debut for Kofi Josephs.

Ed Lucas came up clutch with the game-winner for CoLA as they secured a 55-53 victory over Hoopspace to finish in 7th spot. Lucas finished with 13 points, while AJ Roberts led the way with 14 points, six rebounds and three assists and Deji Adekunle collected 13 rebounds.

Re-watch the games from Week 5 below: