Team White victorious in Under-19 Women's game at #HASC22 - Hoopsfix.com

Team White victorious in Under-19 Women’s game at #HASC22 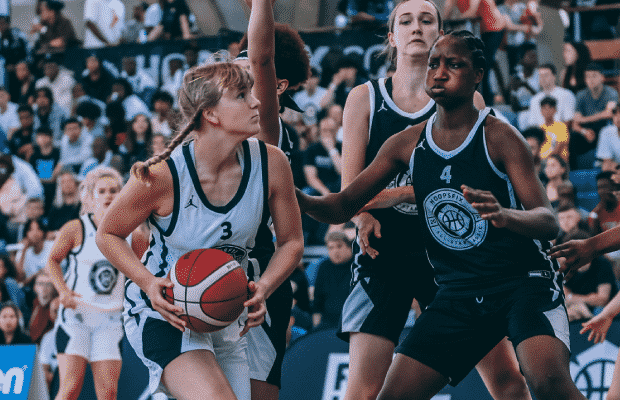 Team White were victorious in the Under-19 Women’s game at the 2022 Hoopsfix All-Star Classic after taking a 79-61 victory, at Crystal Palace, on Saturday.

Issy Bunyan was named MVP in front of 1500 fans after finishing with 14 points, six rebounds and two steals in just 16 minutes of action having played a key role in the pivotal run in the third quarter.

“It feels great, I’m very shocked,” said Bunyan post-game on receiving the award.”The game was very fun and I really enjoyed it. We just needed to pick up our defence and then our offence would come.

There was another strong performance from Isi Ozzy-Momdou with 15 points to lead the team in scoring with Maisie Evison and Katie Januszewska also in double figures with 12 and 11 points, respecitvely.

Bunyan opened the scoring before Evison scored four points in a 10-3 start for Team White as they settled quickest. Molly Lavin scored back-to-back baskets in a 6-0 response with a trio of blocks from Fatmata Janneh, Saruna Gudza and Carys Roy in a minute spell.

The teams were tied at 14-14 after 10 minutes and Ozzy-Momodu began to impose herself inside with eight points early in the second. However, Lavin edged Team Black ahead for the first time at 26-25 to move into double digits in the process.

Evison and Janneh traded five points apiece in a quickfire passage, but a three from Januszewska would help Team White edge into a 35-33 advantage at the half-time break.

Olivia Forster hit a three to open the second half, and then Januszewska and Bunyan combined in a 14-0 run to make it a 17-point game at 52-35. Team Black would score the next 14 points as Kizzy Spence’s triple capped the run to cut the lead back to just three points.

Team White restored momentum with a 10-2 close to take a double-digit cushion in the fourth; leading 62-51 as Mariam Olawoyin closed with successive scores. Roy opened the scoring in the final quarter, but Team Black were held scoreless for over four minutes to derail any hopes of a comeback and Team White ran out 18-point winners.

Lavin top scored in defeat with 17 points on 6-of-11 shooting along with six rebounds and three steals before hobbling off injured during the fourth quarter.