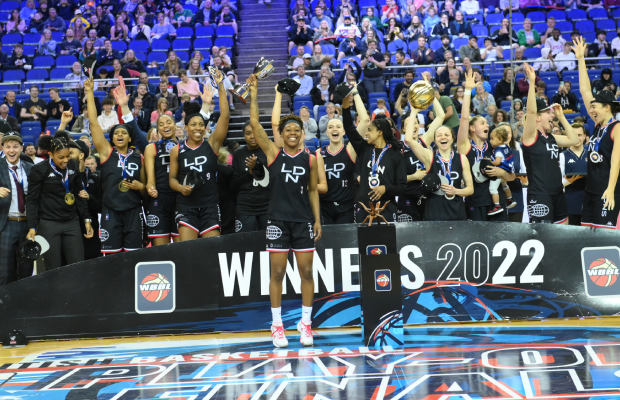 Mark Clark’s side pulled clear in a dominant final quarter as they completed a clean sweep of titles this season, in front of a record WBBL final crowd of over 10,000 at The O2 Arena.

Kennedy Leonard was named final MVP with 13 points, five rebounds, seven assists and four steals having played with a protective mask after breaking her nose in practice a couple of days before the final.

The game’s tip was delayed by over half an hour due to ongoing preparations inside the arena, and both sides were slow out of the blocks.

Sevenoaks scored the first five points of the contest before Holly Winterburn produced a couple of tough finishes to get the Lions underway. The quadruple chasers were held to just 15% shooting in the first quarter as the Suns closed on another mini 5-0 burst to lead 12-7.

Once again, it was the defence that sparked the offence in the second quarter as Shanice Beckford-Norton, in particular, burst into life. The Lions captain had a block at one end before back-to-back threes put her side into the lead at the start of an 18-2 spell.

Beckford-Norton moved into double figures with a tough and-1 as Azania Stewart forced a lot of contested shots to give the Suns nothing easy in the paint. The three-time champions did find a response as successive triples from Renee Busch and Frankie Wurtz came in a 9-0 run to cut the gap to a two-point game.

However, London had the final say in the half as Beckford-Norton’s driving layup beat the buzzer to make it 30-25 at the interval.

Winterburn’s triple restored the double-digit cushion at the start of the third and the Lions began to turn the style as they pushed the tempo in transition. Sevenoaks fought to keep themselves in contention and trailed by only six at 44-38 with 10 minutes remaining.

Then came another ruthless passage of play from London as has been a frequent occurrence throughout the season with Leonard scoring 11 straight points in a 15-0 start to the fourth. All of a sudden it was a 21-point lead.

Chantel Charles joined in on the act from beyond the arc and the Lions saw out the game in style.