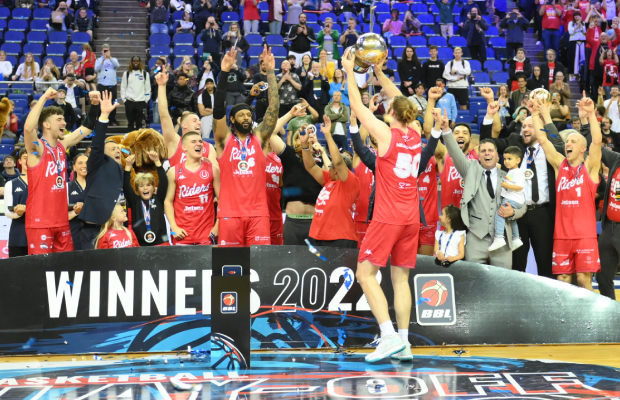 Leicester Riders took over the fourth quarter on their way to securing a thrilling 78-75 victory over London Lions to win the 2022 BBL playoffs title.

It completed yet another BBL treble for the Riders as they followed up their league and Cup triumphs in front of a huge crowd at The O2 Arena.

Two-time league MVP Geno Crandall came up clutch once again with 23 points, seven rebounds and five assists to add a second finals MVP award of the season. For the Lions, Isaiah Reese finished with 29 points as the two guards went at it in a fascinating duel.

Dirk Williams hit a triple to start the scoring as a fast-paced game ensued with hard-fought tension throughout the contest. Reese quickly found his range from downtown and his third three of the game put London up 10 at 27-17.

The gap was cut to six at the end of the first and the Riders made their move with back-to-back and-1 opportunities from Darien Nelson-Henry putting his side into the lead at 33-31 to cap a 10-2 run.

Reese moved to 19 first half points with another three, but London found themselves behind at the break as Leicester established a 46-39 cushion after holding their opponents to 10 points in the second quarter.

Five straight from Lorenzo Cugini in the midst of a 15-3 start to the second half saw the Lions surge back ahead. Momentum was firmly with the hometown side and strong work on the glass from Chris Tawiah and Josh Ward-Hibbert helped push their new-found advantage into double figures.

London stayed in control heading into the fourth quarter as Reese’s basket made it 65-57, but the Riders were quick to wipe out the deficit with Kimbal Mackenzie making an impact in a 9-0 start. The dominant run continued for the league and Cup winners and Leicester had outscored London 13-0 by the midway points to lead by five at 70-65.

Tawiah’s and-1 finally ended the drought with 4:04 to play before Crandall responded in true MVP fashion. The crowd began to live every possession and a tense finale was set up with a one-possession game heading into the final two minutes.

Crandall kept delivering and when the Lions had the chance to force overtime with 2.8 seconds left, they turned the ball over to bring the season to an end.