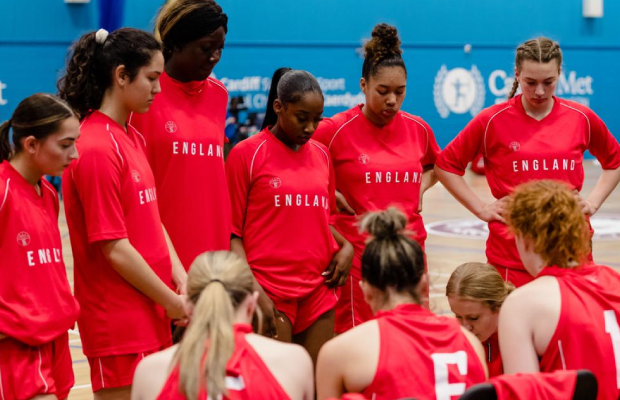 England’s Under-18 Women went unbeaten at the inaugural Four Nations Tournament with wins over Scotland, Ireland and Wales at the two-day event in Cardiff.

Lauren Milligan was handed the reins for the tournament with top spot decided in the final game as England overcame Wales for a 79-72 victory in a close battle of the previously unbeaten sides.

Olivia Forster fired in seven threes in a game-high of 28 points in the win for England with Leia Edwards hauling in 23 rebounds to go with nine points, including a late triple to help ice the game. Fatmata Janneh and Charli Wroe both added 16 points apiece as England finished with a perfect 3-0 record.

England had opened the tournament on Wednesday with a convincing 81-42 victory over Scotland with Wroe and Janneh leading all scorers with 14 points each.

They made it two wins from two later in the day with an 80-65 success against Ireland as Forster top scored with 20 points and Edwards posted a double-double of 15 points and 16 rebounds.

Meanwhile, Wales had also picked up two wins from Day 1 as they started by beating Ireland 67-61 behind 20 points from Daisy Porter and double-doubles from Carys Roy and Issy Bunyan.

The Cardiff Met Archers duo combined again in an 85-54 victory against Scotland with Bunyan posting 26 points, seven rebounds and seven assists, while Roy put up 16 points and 21 rebounds.

Ireland secured their sole victory on the second day as they claimed a dominant 84-29 win over Scotland with Sarah Hickey recording an impressive triple-double with 28 points, 10 rebounds and 10 steals.