Leah McDerment relishing time on the court amid injury battles 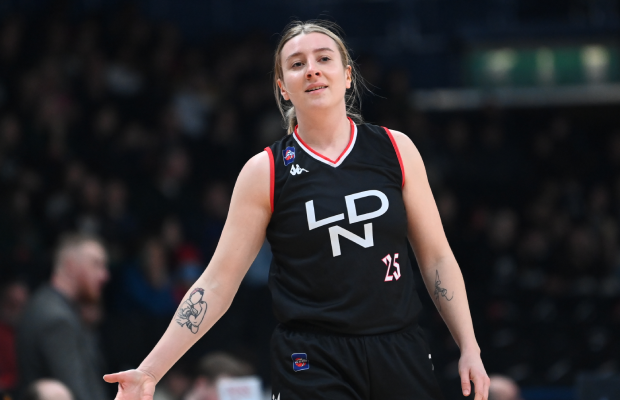 Any time you get to step onto the court in a final is a special occasion and London Lions’ Cup triumph at the start of 2022 held extra meaning for Leah McDerment.

The season has been one of frustration for the 26-year-old with McDerment restricted to just five appearances in the WBBL due to an ongoing battle with injury.

“It was amazing,” McDerment told Hoopsfix. “I was so happy to see the court. I had my family there in the stands and all my best friends from home came to surprise me.

“I didn’t see them until just before the lineups were announced and it was an exciting moment.

“It was a really good crowd and I was able to take in the moment and enjoy being out there with the team.”

BIG weekend
Turned 26, got our first silverware of the season, and had my two worlds collide with a surprise of my girls being sat in the stands
Grateful every time I get to lace them up and to be surrounded by so many incredible women in my life ❤️
These are the moments ✨💫 pic.twitter.com/YAA3wpwxxd

The injury struggles continued, but another chance has come around to experience a final as the Lions currently prepare to take on Sevenoaks Suns in Sunday’s Trophy showpiece in Glasgow.

McDerment made a first league appearance since mid-December with an outing against Newcastle at the weekend; handing out four assists in their 94-47 victory. And, there is a sense of renewed hope that it can now become a regular occurrence.

“I’m feeling really good. It’s obviously been a tough season for me, personally. I’ve been in and out in practice and not been in too many games.

“But I feel good, I’m in great shape and hope to get a few more games under my belt starting with Sunday.”

Frustrations were exacerbated at the start of the campaign with McDerment confined to the sidelines during the club’s historic venture in Europe. 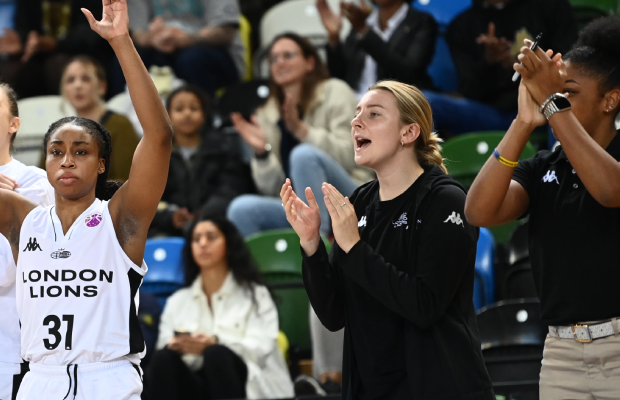 McDerment’s arrival was intended to add solid depth at the point guard position and alleviate the demands on star playmaker Kennedy Leonard, but there were setbacks from the off and they took their toll.

“It’s been really hard mentally,” admitted McDerment. “Obviously, we were assembling a really good roster and pretty much from the start, I wasn’t able to play.

“I struggled to find where I fit and where my role is within the team so it was tough for me at the start, especially during the EuroCup games.

“That was one of the big reasons I came here. I spoke to Mark and was coming to be that secondary point guard piece and support Ken but I only had a couple of minutes here and there.

“It’s been a mental battle as well as struggling physically with setbacks, but I’ve been trying to stay positive and the physios and strength coaches have been amazing; working tirelessly with me.”

McDerment had been out of action for 18 months due to the COVID-19 pandemic, which also led to the delay of foot surgery, having spent the past couple of years in Germany. The opportunity to return home was too good to pass up with the chance also to reunite with former teammates from past days with the junior national teams.

Europe was a major calling card, too, and the team’s ambition does not stop at a successful debut season.

“It was a no-brainer,” McDerment said of the decision to join. “As soon as I had the conversation with Mark, I was really excited. I played under Mark at Barking Abbey – I know him, know the system.

“The prospect of being able to play in a EuroCup team, I never thought was possible. It was nerve-wracking, too, but that’s why I knew exactly why I had to.

“We want to do that all again next season and take no backward steps. We want to keep building momentum. We hold ourselves accountable, our practices are super intense.

“We are looking at the bigger picture and showing that it’s not just a one-time thing and that we belong there and can compete at that level year-upon-year.”

Lions created history with their run to the playoffs in Europe – taking some major scalps along the way as they defeated Gran Canaria, Castors Braine and Bourges in an incredible campaign.

They have also not lost a domestic game since the back-end of last season’s WBBL Championship campaign. London have been dealing with the pressure and expectations as soon as their roster was revealed in the summer and they are embracing the challenge of having a target on their backs.

“Everyone wants to beat London Lions and say that they’ve done that,” stated McDerment. “That’s what fuels us, we have to hold ourselves to that standard and prove that we should be talked about the way we are.”

“We just know that on any given day, anyone can beat anyone. We’ve had some battles along the way and we know that we have to keep our foot on the gas.

“We can’t settle by thinking that we’re great, we have to prove it every time we step on the floor.”

Sevenoaks are next to stand in their way. They have not lost since the last matchup between the two sides back in September’s Cup meeting when Cassie Breen came up with a clutch late three.

Len Busch’s side have been gathering momentum of their own – as they have done consistently over a prolonged period of time – and the season has been building towards this moment as the top two teams lock horns in front of the Sky Sports cameras.

“I think we’re all really looking forward to having a high quality game,” said McDerment. “Sevenoaks have a lot of history and I think this will be good for the league.

“It’s a great opportunity to show what women’s basketball can be like in the UK. It should be an entertaining, good game and we’re excited to get to match up against them.”

The two teams are then set to meet at the Copper Box in the league next Friday when one perfect record will come to an end. But, full focus is first on Sunday’s showdown and the chance to accumulate more silverware to ever-growing trophy cabinets.

McDerment concluded: “It’s amazing to have the opportunity to win so many things – a lot of leagues don’t have that.

“We also have our men’s team there as well and hopefully we can go out and show that it’s been worth 777 putting their time and effort into us. We want to be a good representation of what can be achieved if you invest into British basketball.”

London take on Sevenoaks in Sunday’s final at the Emirates Arena in Glasgow with coverage on Sky Sports starting at 12:30pm.