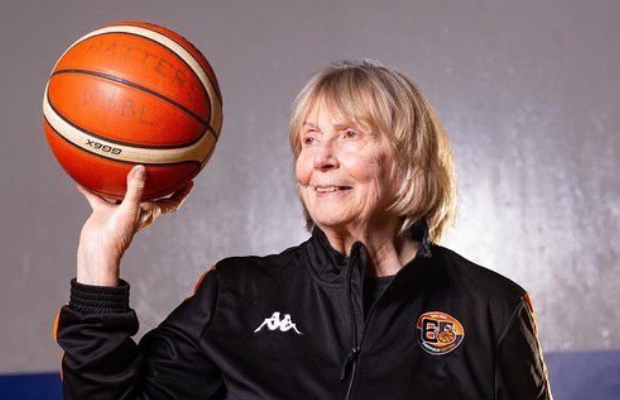 Betty Codona, one of the most important and influential figures in the history of British basketball has passed away, aged 83, Sheffield Hatters have announced.

Codona founded the Sheffield Hatters 60 years ago, aged 22 years old, as the club has gone on to become the most successful women’s basketball club in British basketball history.

In a statement on their instagram, the club wrote:

It is with great sadness we announce the passing of Betty Codona OBE, the founder and chair of the Sheffield Hatters Women’s Basketball Club. Betty unexpectedly passed away, she was a caring mother, grandmother and the Queen of basketball.

Betty was a pioneer in women’s sport throughout her life and was honoured with an OBE for her services to basketball. Dedicating her time to the equality of not just basketball but all of women’s sport. Betty founded the first women’s basketball team in Sheffield which was formed over 60 years ago. She has carried on her legacy in basketball through playing, coaching and even as the Chair of England Basketball.

Betty’s family described her as ‘an inspiration for all, she was determined, relentless, intelligent and most of all passionate. Betty’s ethos will live on through every female who has represented the Hatters. Everyone here within the Hatters are deeply saddened but we stand united to carry on Betty’s values and beliefs as we respect the past and we will forge the future.’

Betty was extremely proud of her two daughters who played to the highest level of basketball in England throughout the 1980’s and 1990’s. Vanessa has followed Betty’s footsteps into coaching even having the chance to represent Great Britain and gaining a Commonwealth games silver medal. She was most proud of her grandchildren: Tyler a coach within the Sheffield Hatters club. Georgia a star player for the Sheffield Hatters WBBL and GB representative. Quinn a highly-touted prospect playing for Capo d’Orlando in Italy. Through her family Betty’s legacy will live on.

During this time Betty’s family would like to thank everyone who has reached out to pay their respects. Over the coming weeks we hope to celebrate the life that Betty has lived and hope to inspire all who knew Betty to do the same.

As England’s first women’s basketball club, the Hatters became the most successful sports club in the city winning back-to-back titles throughout the nineties. Hatters have now won over 65 national titles, most recently the WBBL Cup in 2019.

The 1990s were the peak of Hatters’ success as there were 30 possible trophies for British women’s basketball teams to win, and the Hatters claimed 27 of them.

As a player, Codona competed in the first ever National Cup Championship in 1965, before winning 40 separate pieces of silverware as head coach between 1989 and 2009, prior to moving on to work as the Chair of the club.

She won the BBC Yorkshire Unsung Hero award and was shortlisted for The Sunday Times Grassroots Sportswoman of the Year Award in 2021, which recognises those ‘who have actively engaged with different groups of people within their community through sport’.

The former PE and English teacher was awarded an OBE in 1998 for services to sport and has produced a family of true basketball pedigree, with her daughter Vanessa Ellis being part of the GB coaching set up, granddaughter Georgia Gayle playing in the WBBL and grandsons Quinn Ellis, playing professionally in Italy, and Tyler, coaching within the club.

The sport will stand together this coming weekend in recognition of her accomplishments, with 24 seconds of applause before each game across the BBL, WBBL, and NBL, as British Basketball pauses to remember and respect a true great.