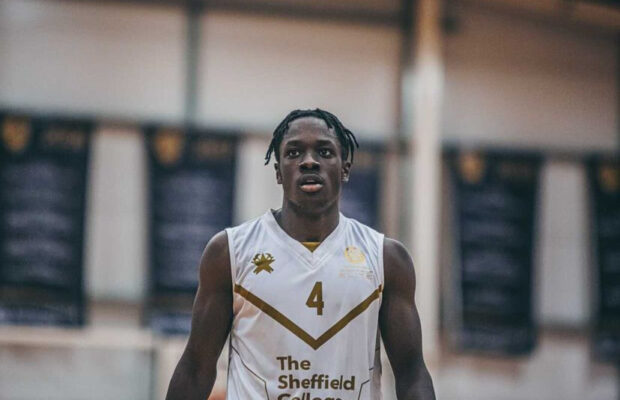 Four teams remain in the pursuit of the 2021-22 EABL Championship after the playoffs began, on Wednesday.

Sheffield College pulled off the biggest surprise of the Elite Eight stage as they defeated Southern Conference champions Oaklands College with an impressive 86-79 victory on the road.

Seventeen year old Declan Kom had a 28-point outing, Charles Okafor had a 16-point, 16-rebound double double for Sheffield, while Mahamud Ibrahim had 17 and 11, as Sheffield overcame a 30-point performance from Oliver Wright, and 19 from Kane Daley.

Sheffield – the fourth-seeds from the North – will stay on the road next week when they take on Myerscough College for a place in the final.

And we advance to the @OfficialEABL final 4!

Juelz Robinson led Myerscough with a 25-point performance, with Euan Birch finishing with 18 and Pedro Ellery 17. Meanwhile, Denzel Dangana had 18 for Itchen and 14 from LA Casinillo.

Meanwhile, Barking Abbey battled past Derby to secure a hard-fought 71-67 success in East london. In a back and forth affair, BA overturned a four point deficit heading into the final 7 minutes, capitalising on some unforced Derby turnovers to escape with a 4 point win.

Joe Buchanan knocked down six threes to lead BA with 18 points, and Cem Uner added 14, while Derby were led by 18 points from Simeon Perry and 17 from Mandre Costa.

BA will face Northern Conference champions Charnwood in a repeat of the 2017 and 2019 finals after Dan Hadley top scored with 20 points in their 104-72 victory over JMA.

Riders lock in the win and progress to the semi-finals!!!!#BritishBasketball pic.twitter.com/NJ0N8w0poQ

Charnwood led from start to finish as Kanu Gudza had 15 and Ceejay Hanson finished with 13. Isaac Round led JMA with a 22 point outing, while Kivuvu Live had 16.