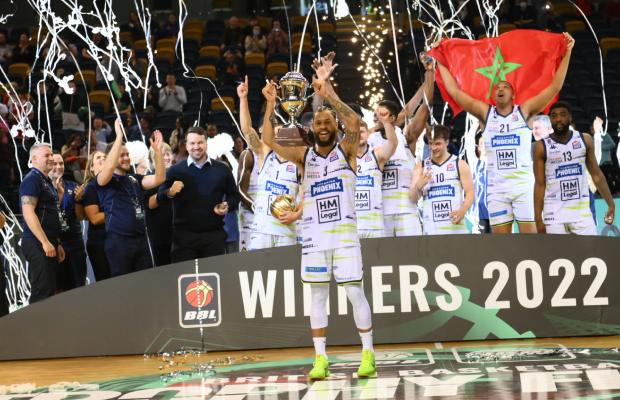 Cheshire Phoenix claimed their first piece of silverware since 2018 after beating London Lions 82-68 to win the 2022 BBL Trophy title at the Emirates Arena in Glasgow, on Sunday.

Ben Thomas’s side dominated the fourth quarter as they pulled clear to add to the club’s silverware in defeating the defending champions.

Larry Austin starred with 23 points and 10 rebounds for a double-double with Namon Wright adding 18 points as four players hit double figures in scoring.

Justin Robinson knocked down the long two from the corner to open the scoring and the two-time league MVP then assisted the next two scores including a three from mid-season addition Ryan Martin in a 7-2 start. Cheshire settled with a 9-0 response which paved the way to Ben Thomas’ side controlling the encounter.

They moved into a double-digit advantage at 26-16 early on in the second with the Lions turning to 20-year-old guard Bradley Kaboza to inject some energy into the game. Kyle Carey hit a three late in the half only for Dirk Williams to respond shortly after an emphatic dunk to move to 17 first-half points as London had halved their deficit to 40-35.

Teddy Okereafor’s three was followed by an and-1 from Austin as Cheshire quickly moved into a 12-point lead in the third quarter. London rallied through the efforts of Kaboza as they got back to within four points before Carey netted another triple to help his side into a 61-55 advantage.

Austin then scored back-to-back baskets as part of an 11-0 start to the fourth with Cheshire building their biggest lead of the game. The Lions were held scoreless for almost five minutes until Dirk Williams stopped the rot with a breakaway dunk, which only reduced their arrears to 17.