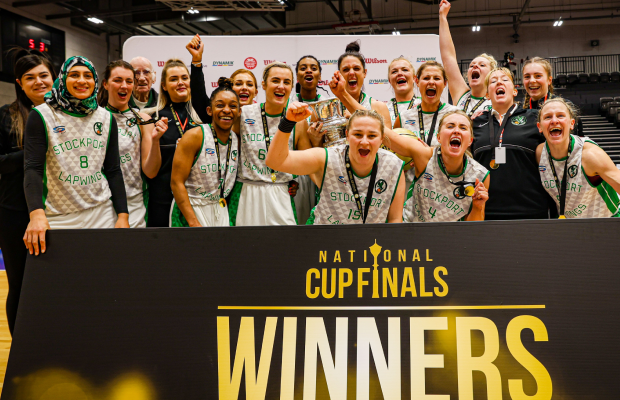 Stockport Lapwings capped a brilliant National Cup run as they came from behind to defeat Solent Kestrels 81-77 to take the title in overtime, in Manchester, on Sunday.

The Division 2 side wiped out an 11-point deficit inside the final three minutes to force an extra period, where they would complete the turnaround for a memorable triumph.

Jade Butters starred in the win with 26 points along with eight rebounds and seven assists for Stockport with Lauren Quigley and Rosie Hynes also in double figures in scoring.

The Kestrels made the brighter start to lead 15-8 in a fast-paced opening quarter with all five starters on the scoresheet early. Stockport hit back with an 8-0 close as Rosie Hynes netted five points to put the side up 19-17.

Jade Butters hit back-to-back triples to spark a 10-0 burst in the second as the Lapwings established an 11-point cushion. However, Solent enjoyed the better finish to the half with Faye Endean – who top scored with 22 points – capping an 11-2 run with a triple to make it 41-40 at the half.

The game slowed down in the third as points were harder to come by and the Kestrels held their opponents to single figures as they managed to increase their advantage to five to lead 54-49.

Erin Caldwell hit a three to start the fourth as Solent quickly doubled their lead to 10. Stockport reduced their arrears back into single figures before Anna Nevison connected from beyond the arc to make it 67-56 with 3:37 remaining.

Molly Danielson – who had 14 points and 18 rebounds – hobbled off down the stretch, and Stockport capitalised with a 9-0 run to make it a one-possession game inside the final 30 seconds. Lauren Dabbs went 0-of-2 from the foul line and Emma Macready tied the game to force overtime.

Dabbs recovered with five points in quick succession, but MVP Butters scored nine of Stockport’s 11 in a pivotal spell to take control. Solent closed the gap to two points late on, but the Lapwings iced the win to spark jubilant celebrations.