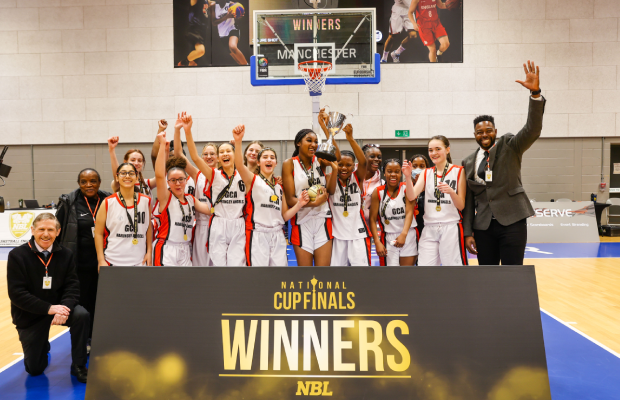 Haringey Angels claimed the U16 National Cup title with a dramatic 72-70 victory over Manchester Mystics at the NBPC in Manchester, on Saturday.

Felicia Jacobs starred in the win with 24 points – including the game-winner in the final seconds – and 16 rebounds along with eight steals and five blocks to earn the MVP award.

Three other players hit double figures for Haringey with Ayla Hubbal netting 15 points to go with seven assists and six steals as the Angels backed up a strong start.

Haringey scored 11 unanswered points early in the first to take control in the contest as they opened up a 24-9 advantage after 10 minutes.

The lead peaked at 17 points in the first half, but Manchester edged the second quarter to trail 41-27 at half-time before continuing to mount their recovery after the break. The Mystics took the third 22-16 and then used an 11-0 burst to surge ahead on a three from Rose Piskorska – who finished with 14 points and 12 rebounds – as an exciting finish ensued.

Jacobs capped a 5-0 run to put Haringey up 68-66 with Manchester twice levelling the game inside the final two minutes before the MVP had the final say.