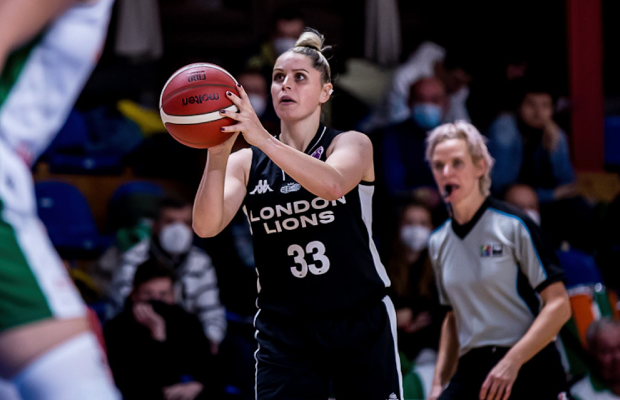 London Lions must now wait on other results to determine their EuroCup playoffs hopes after falling to a 70-67 loss on the road against Castors Braine, on Wednesday evening.

Jo Leedham-Warner produced a colossal performance with 25 points, seven rebounds and nine steals as the Lions rallied from a 15-point deficit in the third to set up a thrilling finale that the visitors came out on the wrong side of.

The Lions made a bright start as Leedham-Warner took on the scoring onus with the first seven points for the visitors. Aislinn Konig would hit two threes to keep it close and a third was later followed by successive scores inside as Castors Braine moved into their first lead.

When a fourth Konig three came at the buzzer, it capped a 12-2 run to put the hosts 20-13 ahead with the Lions 1-of-8 from beyond the arc with careless turnovers slipped in.

Lions began to get back into an offensive rhythm with their defence leading the way in forcing their opponents into double figures in turnovers. Azania Stewart scored five straight to cut the gap to just a single point, but another three from the Belgian side sparked a 7-0 run to help take a 38-31 advantage into the break.

The second half resumed with Konig again from deep. And, if it wasn’t the Canadian, then it was Valeriya Berezhynska as the duo combined to help stretch the lead out to 15 points. However, whereas last week got away from the Lions, this time they showed their resilience once more.

Leedham-Warner was at the heart of a 10-2 rally with the Lions finding their voices and energy on both ends of the floor. All of a sudden, they were back to within single figures and trailed 56-48 at the end of the third quarter.

The Lions then started hitting from behind the arc with both Cassie Breen and Leedham-Warner both firing with the momentum with the visitors. It was a one-point game at 65-64 and again at 67-66 with the Lions’ defence keeping themselves in the game down the stretch.

However, they couldn’t quite go ahead with a decisive score and Castors Braine held on to finish 5-1 in the group and leave the Lions waiting on other results.

.@ShanNorts14 goes no look on the dime to Cassie Breen for three! The comeback is on! 🔥🇬🇧🏀 pic.twitter.com/9M3gAOaUBw

Firstly, they need Keltern to lose at home to Zabiny Brno otherwise the Lions will be consigned to a bottom placed finish in the group, while they also need to finish above one other team amongst the third-placed teams in Conference 2.