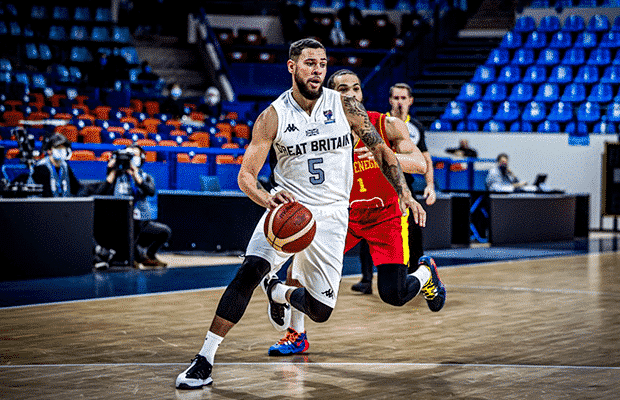 Great Britain’s 24-man squad for the first window of FIBA World Cup 2023 Qualifiers has been selected.

The long-list, which is difficult to read too much into with only 14 usually brought in for training camp, continues to be built around a core group of veterans such as Dan Clark, Ashley Hamilton, Myles Hesson, Dwayne Lautier-Ogunleye, Ben Mockford, Luke Nelson, Teddy Okereafor, and Gabe Olaseni.

The selection of those eight along with GB regulars Gareth Murray, Tarik Phillip, Jacob Round, and Ovie Soko sees all 12 players from February’s EuroBasket 2022 Qualifying window named in the 24.

The team will once again be led by Marc Steutel, with Head Coach Nate Reinking absent due to his role as assistant coach with the Cleveland Cavaliers.

Their first taste of action for the team will be against Greece in Newcastle on November 25. GB were drawn into Group B along with Greece, Turkey, and Belarus for the first round of FIBA World Cup 2022 Qualifying which will take place over three windows in November, February 2022, and June 2022.

GB play Greece on 25 November and Turkey on 28 November. The final 12-man rosters will be confirmed ahead of each game.

Ironman Teddy Okereafor will set a new record for most consecutive international games played if he is selected for the first game against Greece. Okereafor tied the current record of 49 consecutive games, which has been held by Bill McInnes since 1976, in February against France.

Dan Clark (108 caps) will move closer to becoming GB’s all-time Men’s International Cap winner with only Eric Boateng (116 caps) ahead of him.