Chantel Charles: "It's time to recharge, reflect and come back stronger" - Hoopsfix.com 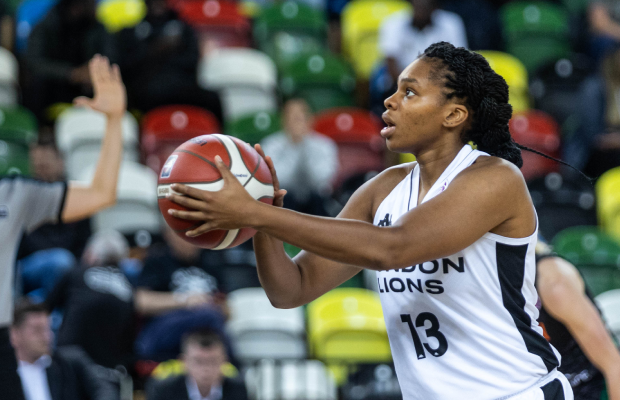 Chantel Charles believes the upcoming break can be a good thing for London Lions as they aim for a strong finish to their EuroCup regular season campaign.

The Lions were beaten 61-68 at home to Rutronik Stars Keltern at the Copper Box on Wednesday night as they dropped to 2-2 in the group.

Their final two games against Zabiny Brno and Castors Braine will be on the road, but after four games in as many weeks, the Lions now have three weeks to prepare for those crunch encounters in the midst of the international window.

“I’m looking forward to the break,” Charles told Hoopsfix. “It will give us a chance to recharge and reflect on where we’ve come. We can’t be too disheartened by the loss and we have to come back stronger.”

London had led by as many as six points at 47-41 late in the third, but their German visitors went on a 14-0 run across quarters to take control. The WBBL joint league leaders made another late rally to make it a one-point game, but came up short of recording a third win in the group.

“It was a tough one,” Charles added. “We just couldn’t finish it. It’s pretty frustrating, but we tried.

“We held them to a low percentage still, but just couldn’t execute at the other end.

“We know every possession counts – this is a step up in level and you need to be ready from the start, we need to get that first punch in early.”

Kennedy Leonard added in the post-game conference: “Last week’s win didn’t make us a great team and this loss doesn’t make us a terrible team. All we can do now is go up, if anything it will help us to be better, have more focus in practice and keep pushing each other.

“It’s always nice to have a little break and we will be able to get Jo [Leedham-Warner] back and get ready for the two games on the road.”

The Lions have already made history by making it this far, but the playoffs are well within their sight despite their second loss. They are currently the top-ranked third-placed side in their Conference (Groups G-L) – only four of six advance – but will be targeting two wins to take care of their own business without relying on results elsewhere.

“We’re not here just to be here, we want to make a statement,” said Charles. “We know we are talented enough to be here and we want to show that in the last two games.”

London’s next game prior to their next European outing is a Cup semi-final clash with fellow unbeaten side Sheffield Hatters.