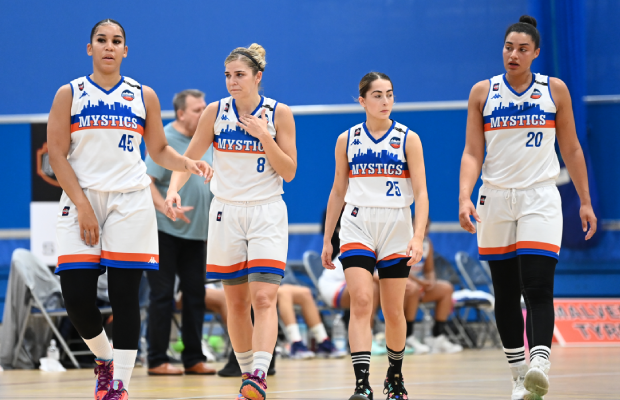 Three teams remain unbeaten in the WBBL Championship, while the weekend’s action saw five of the eight games won by the road side.

All three teams were victorious on their travels on Sunday including Manchester Met Mystics, who claimed a double-winning weekend to ignite their campaign.

The Lions followed up a thrilling EuroCup regular season opening win in Germany with their third straight league triumph as they defeated Essex by 10 on the road to move to 3-0. Without Holly Winterburn (COVID-19 protocols) and Jo Leedham-Warner, the Lions still had enough with Shanice Beckford-Norton top scoring with 16 points.

Steph Umeh added 15 points off the bench, while Azania Stewart posted 11 points and 14 rebounds in just 16 minutes of action with Kennedy Leonard handing out nine assists. London play their first European group game at the Copper Box on Wednesday before welcoming WBBL newcomers Gloucester on Sunday.

Another convincing display from the Suns as Cat Carr became the all-time leader in rebounds in WBBL Championship history – passing former teammate Ta’Yani Clark. The reigning MVP finished with 16 points, 11 rebounds and eight assists in another near triple-double performance.

Sevenoaks held their opponents to just nine points in both the second and third quarters on their way to a 31-point victory. There were five players in double figures in total with their core of six again all contributing with the Suns now heading on the road to take on Oaklands in search of another league success.

Big test on the road? Passed. The Hatters preserved their unbeaten status with a hard-fought win away at Leicester as they battled to a three-point triumph. Helen Naylor top scored with 19 points in the win with Ariona Gill bringing the extra quality off the bench with an 18-point effort with Georgia Gayle adding eight assists to 10 points.

Sheffield used a 6-0 burst inside the final three minutes to surge ahead and they were able to hold on down the stretch in an exciting finish. They stay on the road this weekend with a trip to face Nottingham as they look to keep the early pace at the top of the league standings.

Back-to-back defeats for the Riders, but not too much to be disheartened about. They came up short in the three-point loss against a strong Sheffield side and were also without point guard Brooklynn McAlear-Fanus.

Chelsea Jennings looks to be a real talent with the American posting 20 points, five rebounds and seven assists, while Oceana Hamilton collected 19 boards in a tough battle inside against the Hatters’ bigs. The Riders will look to bounce back as they make the trip north to take on Newcastle in a preview of their Cup semi-final clash.

The Mystics are on the move. A double-winning weekend was just what they needed and coincided with the arrival of American addition Erika Williams. Two solid contributions from the bench helped Manchester first beat Caledonia by 21 at home and then edge out Gloucester on the road for a three-point success.

Lauren Thomas-Johnson starred on their home floor with a 26-point haul, while Dom Allen posted a stellar double-double of 16 points and 17 rebounds along with three blocks against the Queens. Perhaps two wins they would have expected, but a platform for Jeff Jones’ side to build upon after a shaky start to the season.

The Queens were chasing a 3-0 start and almost pulled off a remarkable recovery. Melita Emanuel-Carr gave everything with 18 points, 15 rebounds and nine assists in a full 40-minute effort with Maura Fitzpatrick pouring in a game-high 26 points in vain as they fell short against Manchester.

Gloucester hit 15 threes in the contest, but were just 7-of-21 from inside and had trailed by as many as 16 points inside the final four minutes before launching a dramatic fightback with a 17-3 spell to close to within two. However, they came up short and now face their toughest test yet with a trip to face the unbeaten leaders, London.

As comfortable as it can get on the road in the WBBL. Cardiff restricted Durham to a woeful shooting start in the first quarter as they quickly established a double-digit advantage and never looked back. Shannon Hatch posted another double-double with 16 points and 10 rebounds with three other players in double figures.

The lead peaked at 36 points and minutes were spread throughout the roster as Stef Collins’ side moved to 2-1. They will have a chance to really state their intentions at the weekend with another road encounter; this time against the resurgent Mystics with the victor able to move to a precious 3-1 record at this early stage.

Ashley Harris, Jasmine Joyner and now Kennedy Nicholas. The Wildcats love finding dominant bigs that are double-double machines. Nicholas finished with 20 points and 25 rebounds in Nottingham’s first win of the season as they outlasted Oaklands in an overtime thriller.

Compatriots Brooklyn Pannell and Shaunay Edmonds shone too; combining for a further 43 points, while Pannell also blocked two potential game-winners at the end of regulation. Brahe Ashton also hit a couple of big threes in the fourth and totalled 10 points and eight assists in support. Next up, the unbeaten Hatters at home.

The Rebels still await their maiden victory on the season, but will be glad to see the back of London and Sevenoaks following a tough opening stretch to their campaign. Essex finally had Lucrezia Costa back on the floor and leaned on a red-hot Ashleigh Munns firing with seven threes in a 26-point haul to keep the scoreline close.

Essex now have a week off from action with a chance to continue to build their chemistry as their schedule now eases somewhat with Manchester, Durham and Cardiff (twice) to follow in their next four games in what will be an important stretch to get their season going.

A third straight defeat saw Newcastle fall to the bottom of the early WBBL Championship standings, whilst the fear of Courtney Clasen’s season-ending injury was confirmed. Chris Bunten’s side were blown away by Sevenoaks in a 31-point defeat on the road.

Chloe Gaynor was one of the bright sparks in the contest with a battling display at both ends to accrue 12 points and six rebounds. The Eagles host Leicester on Saturday in an important game for both sides, though  they may have to wait an extra week for Spaniard Marina Fernandez to return to the lineup when they face Durham.

The Wolves looked to be heading to a second league win as they moved into an 11-point lead with four minutes left of the third in Nottingham. However, they eventually needed a late basket from Merissa Quick to force an extra period, where they would be held to just five points in five minutes.

Greeta Uprus top scored in defeat with 22 points, while Quick and Lizzy Harrison added 17 and 16 points respectively. The Wolves drop to 1-5 in all competitions and next face the reigning league champions when they host Sevenoaks on Saturday.

A really poor first half, and a really good second half. That sums up the Durham double-header as they split their weekend encounters; losing heavily at home to Cardiff before bouncing back to win in Scotland with their short rotation.

The Palatinates missed their first 19 attempts from the field against the Archers and finished at 21% shooting in a 33-point home defeat. They led by a single point at the half against Caledonia before pulling clear with a 9-25 third period as Goretti Hurtado poured in 24 points to go with 10 rebounds and seven steals, while Elle Hendershot had 19 points and 18 rebounds. No action for them this weekend.

Pride suffered two defeats on the weekend as they were beaten away at Manchester before a second-half collapse saw them fall to a heavy loss against Durham. Maud Ranger posted a fourth straight league double-double with 12 points and 17 rebounds with Elise Tweedi adding 13 & 13 at home to the Palatinates as a one-point half-time deficit turned into a 31-point loss.

Ranger and Sian Phillips had combined for 35 points, 20 rebounds and 10 assists in the 21-point road loss to Manchester with the young Pride side gaining valuable experience. They also have the weekend off before returning to action with a trip to take on Leicester to close out the month.