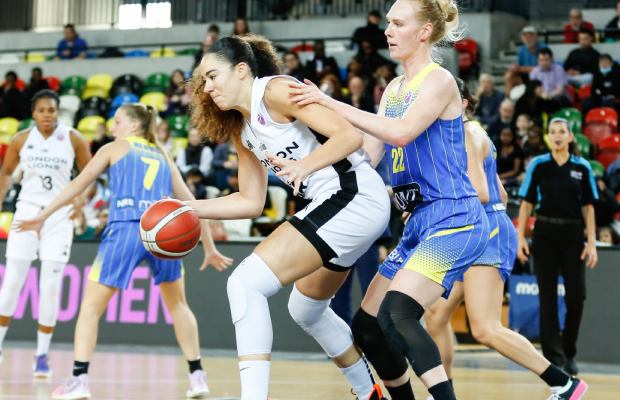 Mark Clark’s side produced a strong defensive display to move to 2-1 and join their opponents at the top of the Group K standings.

There was little between the sides in the early stages as the Lions made a better start this week; trading baskets throughout the opening 10 minutes. The visitors won a late three-point battle to end the first to edge ahead at 19-21.

Winterburn hit London’s second three early in the second as part of a 13-point first half; once again finding success driving to the basket. The Belgian side continued to make shots from outside and surged into the largest lead of the game at 26-33.

The Lions needed a response and stepped up on the defensive end, which allowed them to chip away at the deficit and they would take the lead going into half-time as successive threes from Leonard capped a 12-0 close.

Castors Braine scored two baskets in quick succession to end their drought at the start of the third to spark an overall 11-2 run to re-take the lead and soon re-establish their seven-point cushion. London levelled on a three from Cassie Breen in a 7-0 burst and needed another late Leonard triple to tie the game at 54-54 heading into the fourth.

Another long-range effort from Breen opened the crucial final period and the Lions stayed ahead through their defensive effort and seven unanswered points from Beckford-Norton as part of a critical 9-0 run that spanned over four minutes.

The Lions finished with 27 turnovers in the contest – 10 accounted to Leonard – but their defence held strong opposition to less than 65 points for a crucial win. Onto the reverse fixture with Rutronik Stars Keltern next week at the Copper Box.