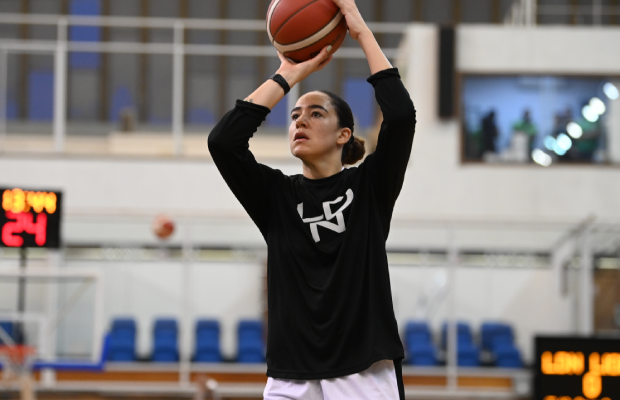 London Lions secured qualification to the regular season of EuroCup Women despite suffering a 67-56 defeat against Gran Canaria in Thursday’s second leg, in Spain.

Mark Clark’s side anticipated a much tougher challenger following their historic first leg triumph and were able to secure an overall 132-113 victory on aggregate.

The London Lions have advanced to the @EuroCupWomen regular season! 🙌👏 pic.twitter.com/z5pN3eY4w7

Holly Winterburn top scored with 16 points with Shanice Beckford-Norton adding 15 points as the only two players in double figures.

Clark went with the same all-British starting five as the first leg and Azania Stewart was first on the board after the hosts had opened the scoring from beyond the arc.

Chantel Charles put the Lions ahead for the first time with a three, though neither side were able to take control early on in a low-scoring start. Gran Canaria then put together a timely 13-3 run to establish a 22-14 lead at the end of the first quarter with the visitors unable to prevent their opponents shooting 60% from the floor.

The gap on the night hovered around double figures as the Lions had scores from Winterburn and a tough and-1 finish from Stewart. There were two quick fouls called on Shanice Beckford-Norton as American rookie Maya Caldwell moved into double figures to spark an 8-0 run to make with the aggregate deficit cut in half at 36-21.

Winterburn stopped the rot with another strong finish before a quick steal and score from Leonard forced the opposition into a timeout and halt their momentum. Another score from Caldwell put the hosts up 40-27 heading into half-time with the Lions needing to regroup at the half.

The two teams traded baskets in a low-scoring affair in the third, which suited London with both time – and the overall situation – still on their side. 16-year-old Carla Brito continued to have a big game for Gran Canaria, but they were held to just 13 points in the quarter as the Lions managed to narrowly increase the aggregate lead to 18; trailing 53-41 on the night.

All of the momentum had been sapped out of the hosts as the Lions’ defence stepped up at the right time and avoided a dramatic finish with a controlled second-half display – eventually falling to an 11-point defeat after an early scare.

London may not have been at their best, but they got the job done and that was all that mattered. And while improvements will of course be needed, it takes nothing away from how big an achievement this is.

– London Lions won the first leg 76-46 at Crystal Palace
– Rhondda Rebels were the last British team to qualify for EuroCup Women in 2007
– Starters: Leonard, Beckford-Norton, Winterburn, Charles & Stewart
– Leah McDerment made a club debut for the Lions
– Valentina Klocker, Jo Leedham-Warner and Nicholle Lavinier were DNPs
– London Lions placed into Group K of the regular season with a six-game schedule including trips to Germany, Belgium and Czech Republic