Lions count on experienced heads to guard against complacency - Hoopsfix.com

Lions count on experienced heads to guard against complacency 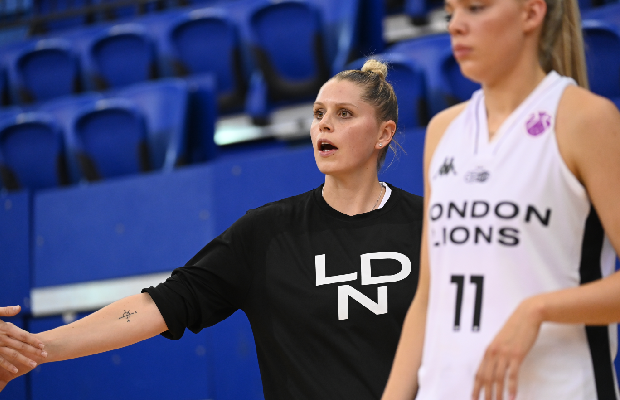 London Lions take a 30-point cushion into Thursday’s second leg of their EuroCup Women qualifier against Gran Canaria as they anticipate a much tougher encounter on the road.

Mark Clark’s side produced a complete performance to win 76-46 on their European debut at Crystal Palace last Thursday and must now finish the job to book a spot in the regular season.

“Really excited about the opportunity,” Clark told Hoopsfix. “It was great to have everyone on the floor at practice [on Tuesday]. We’re excited to have that problem of working out rotations. We are obviously deep when everyone is available, everyone has come out of the weekend in good shape, everyone is ready to play so that is the first thing that is positive.

When asked post-game last week if there was a worry about complacency in the return fixture, the Lions head coach simply replied: ‘We have Jo Leedham, so no.’

The players on the team, too, highlighted the influence of the GB star along with fellow Olympian Azania Stewart with their experience no doubt invaluable for a British team making this historic venture.

“I don’t think Azania and Jo are going to let us get complacent,” said Holly Winterburn, who excelled on European debut with a game-high 22 points. “They were saying the whole game, it’s 0-0 and we’re only halfway so I think we all know this is 80 minutes.”

Even though Leedham-Warner did not play in the first leg, the former EuroCup winner still played a pivotal role with words of encouragement stemming from the bench as well as offering vital pearls of wisdom in practices and away from the court.

The 33-year-old is being carefully managed upon a return to action and could make a debut on Thursday at the Gran Canaria Arena with fellow summer recruit Leah McDerment also looking to return from an injury.

That 3 wins in 4 days feeling!! My time is coming 🤞🏼🤞🏼 pic.twitter.com/K4iwEWlTXJ

London started the domestic season with contrasting Cup wins over Essex Rebels and Sevenoaks Suns with a huge go-ahead three from Cassie Breen helping secure a five-point triumph on Sunday. Stewart sat out Saturday’s win against Essex with Shanice Beckford-Norton absent against the Suns as the Lions utilise their depth to avoid taking any risks with injuries.

The tough schedule will continue following tonight’s second leg with the Lions heading from Spain to Scotland as they take on a young Caledonia Pride side in their league opening at the weekend.

All the focus will first be on their European clash with Gran Canaria, however, and the Spanish side still managed to show glimpses of their threat even in a 30-point loss. Maya Caldwell scored eight points in a hurry in a fourth having endured a frustrating night as the Lions locked in on defence.

But the danger level of the American rookie remains and Caldwell top scored in Gran Canaria’s opening league defeat at the weekend. They will need a fast start in front of their home fans and the Lions have to reset and keep their composure in a testing environment that scratches the surface of what lies in store in the regular season.

The game will tip-off at 7pm UK time and will be streamed live on the FIBA YouTube channel.