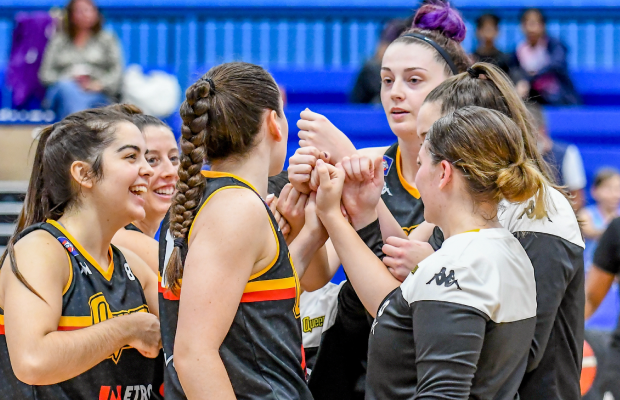 Gloucester City Queens made their official bow in the WBBL with a hard-fought 77-70 loss against Cardiff Met Archers in the WBBL Cup.

The South-West franchise became the 15th club – add on Brixton and Leeds to this year’s teams quota – to compete in the league as the short-handed Queens saw their starting lineup play the full 40 minutes.

Marlee Ball scored Gloucester’s first-ever points and went on to finish with 26 points, nine rebounds and four assists having made the switch from Cardiff in the summer.

Meanwhile, Irish-American guard Maura Fitzpatrick posted a big double-double of 17 points and 15 rebounds with Claire Abbott adding 19 points as Inma Bautista and Layla Hall both made their WBBL debuts having joined from WNBL D1 side Worcester Wolves.

“All five out there on the floor today should be proud,” head coach Jay Marriott said, via the club’s website. “Layla and Inma playing their first time at this level, they really stood up and took the test on well.

“A lot of positives to take away from today, I’m delighted with their heart and effort, a lot of encouraging stuff out there as we move forward.”

Gloucester were dealt a blow ahead of their opener with GB international Melita Emanuel-Carr kept on the sidelines with issues with a recurring knee injury delaying her debut.

The team returns to action in Cardiff on Sunday as they take on Leicester Riders, who started their campaign with a hard-fought success against Oaklands Wolves.

Elsewhere, Sheffield Hatters host Manchester Met Mystics and Durham Palatinates entertain Newcastle Eagles with the winners advancing to the semi-finals, while London Lions can also book their place in the last four if they beat Sevenoaks Suns.