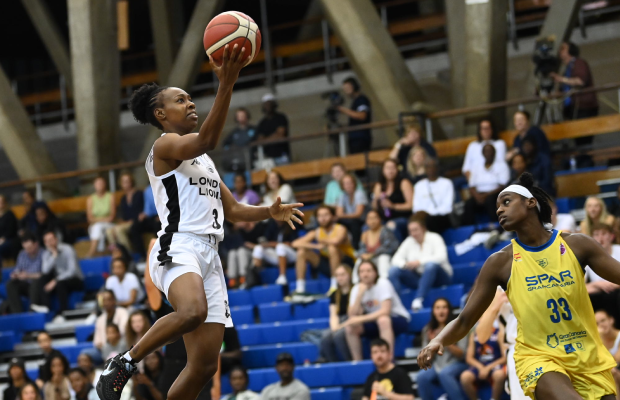 London Lions took on the challenge of their first-ever European encounter in their stride with a comprehensive 76-46 victory over Spanish side, Gran Canaria, on Thursday evening.

There was a buzz around tip-off at the Crystal Palace National Sports Centre which progressed into a roar as the Lions put together a clinical, complete performance on home soil.

Mark Clark’s side take a handy advantage into next week’s second leg in Spain with the aggregate victors securing a spot in the regular season.

The historic first points were accumulated by Chantel Charles with a mid-range jumpshot and intentions on the other side of the floor were known early as Beckford-Norton locked in on dangerous scorer, Maya Caldwell.

Last season’s Riders connection of Winterburn and Azania Stewart was back in full flow for the Lions, who asserted their authority with a pivotal 19-3 spell capped by a three from Cassie Breen. A 7-0 close from the visitors narrowed the gap, but it was still a healthy 25-14 gap after 10 minutes.

Breen stayed hot at the start of the second with a flurry of points to keep the momentum. Winterburn hit another three and moved to 13 points with another impressive finish to cap an 11-0 run that closed the first half and put the Lions up 25 points at 45-20.

Gran Canaria were held to just 21% shooting – emphasised with the struggles to get Caldwell into the game with the third round WNBA Draft pick contained to just 1-of-10 from the floor in the first half.

Beckford-Norton handled parts of that defensive assignment then began to showcase the offensive repertoire with five points in another bright opening from London at the start of the third quarter.

The Lions were everywhere on the court. Breaking up passing lanes, hustling for loose balls and showing that will to win. That left nothing easy for their opponents and Gran Canaria were held to just eight points in the third with the score doubled up at 56-28.

The margin was going to be important, however, and Gran Canaria began to find life to reduce their arrears as Caldwell hit back-to-back threes to offer brief encouragement on an otherwise frustrating night. Winterburn connected from deep again in response and the 30-point cushion was restored.

– London Lions made their debut in European competition
– Starters: Leonard, Beckford-Norton, Winterburn, Charles & Stewart.
– Winterburn, Stewart made their official club debuts
– Jo Leedham-Warner, Fatmata Janneh and Nicholle Lavinier were DNPs
– Leah McDerment was not part of the 12 due to injury