Kennedy Leonard on EuroCup win: 'This solidifies the fact that we are a good team' - Hoopsfix.com

Support
Home / Features / Kennedy Leonard on EuroCup win: ‘This solidifies the fact that we are a good team’

Kennedy Leonard on EuroCup win: ‘This solidifies the fact that we are a good team’ 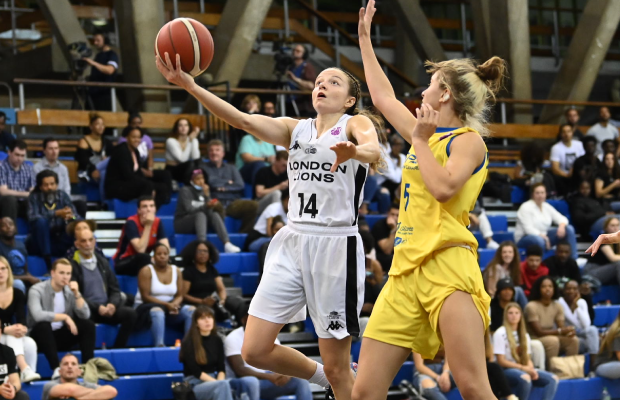 Kennedy Leonard insists London Lions will not get carried away with their 30-point first leg win over Gran Canaria in the EuroCup Women qualifiers.

The British side dismantled their Spanish visitors with a complete performance, but are only halfway through the tie with a return trip to follow next week.

“Honestly, it’s a bit shocking,” Leonard said of the final margin when speaking to Hoopsfix post-game. “You go into this game expecting it to be tooth-and-nail and then we win by 30.

“But it feels good. We knew we were capable of winning like this. It solidifies the fact that we are a good team and we didn’t have everyone tonight so it’s a good confidence builder for us.”

Leonard pointed to the experience of GB stars Jo Leedham-Warner and Azania Stewart for their influence in preparing the team’s mindset with the majority of the team not used to playing two-legged contests.

“Mark [Clark], Jo and Azania told us we needed to win by as much as we could and play every possession for 40 minutes.

“It was important to remember to play for the whole game because usually when you are winning by 20, 30 points you know that you have won the game.

“It reminds us that it’s going to be a whole different world in Spain – a lot of us haven’t played there or played aggregate scoring.

The Lions kept Gran Canaria to less than 50 points with a clinical performance on the defensive end with scoring threat Maya Caldwell contained to 16 points on 6-of-22 shooting from the floor.

The defence was a key factor and something the Lions had locked in on in practice ahead of the tie with Leonard pleased with the team’s execution of the plan.

“The whole week Mark has been talking about defence,” she said. “It starts with our defence, stopping them in transition, push and things like that.

“Obviously, we had some lapses – they scored some late points so we could have won by more, but for the most part we did what we were meant to do; we rotated, we helped and we had each other’s backs and it worked out well for us.”

Next up for the Lions is a weekend double-header in the WBBL Cup against Essex Rebels and Sevenoaks Suns with two additional games for the squad to build upon before looking to complete their European mission next Thursday.