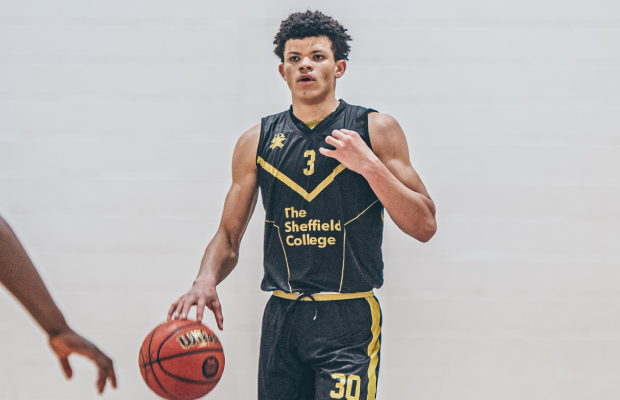 Hensy Sako was at the last two editions of the Hoopsfix All-Star Classic, but Saturday will mark the first time the emerging talent takes to the court.

The Sheffield Elite guard has earned his first call-up to the event having previously been amongst the crowd in Brixton in 2018 and 2019.

“To be there watching was very entertaining and motivating at the same time,” he told Hoopsfix. “I knew that if I kept putting the hours in I had the potential to play at the event, too.

“It feels great to be selected as it’s basically a reward for all the work that I’ve put in.”

Sako seized his opportunity in the EABL Summer Showcase with impressive performances catching the eye. The 2002-born guard fired in 28 points in a Week 3 victory against Manchester to earn the Player of the Week award.

The scoring form continued into the next week as a 27-point haul followed and Sako was confident he had put himself in contention for a spot in the Classic.

“The past couple of years I was completely unknown so it felt great to finally get some recognition,” he explained.

“This year everyone started to pay more attention to Sheffield Elite with all the unexpected performances from our team, so I knew that if I kept going hard I’d get noticed and potentially picked for the All-Star Classic.”

The EABL Summer Showcase enabled a return to action for many junior players after their seasons were cancelled due to the COVID-19 pandemic. Sako didn’t allow the setback to deter his commitment and helped his side earn recognition.

“These performances felt great especially as lockdown put us on hold, but that didn’t stop us from working hard and having team sessions on Zoom throughout.

“I was quite pleased with my performances overall, but obviously felt like I could do better especially after watching over the tape.

“No-one expected Sheffield to win any games or to be as known as we are now.”

From the stands to the court, Sako is relishing the opportunity to take to the main stage and come away with victory at the Battersea Sports Centre.

“I’m looking forward to play with everyone on Team Black especially as I definitely feel like we are the better team.

“Going up against Team White is going to be fun and full of good matchups as they obviously have a lot of talented players, too.

“This event means a lot as a lot of people are going to be watching and I am finally getting some recognition.

“My mindset for Saturday is obviously to go and get the win and play hard.”

The Under-19 Men’s game is set to tip-off at 5pm on Saturday with the event live streamed at hoopsfixallstarclassic.com.