Star-studded lineup for WBBL Team of the Year - Hoopsfix.com

Star-studded lineup for WBBL Team of the Year 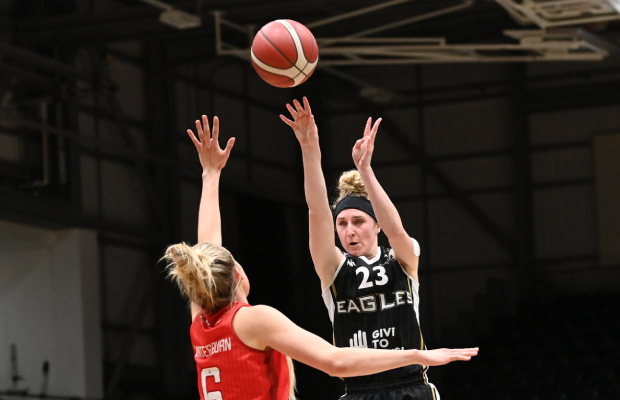 The WBBL Team of the Year has been announced with three first-time selections amongst the lineup, as voted by the league’s head coaches.

Holly Winterburn makes the overall team for the first time with fellow All-British Team member Kennedy Leonard one of two London Lions to make the lineup with Cassie Breen also in.

Gorrell was the leading scorer in the league with 23.6 points per game – netting nearly 500 points during the regular season, whilst leading the Eagles into the playoffs, where they have since gone on to reach the final.

Carr led Sevenoaks Suns to another league title with 18.8 points, 8.8 rebounds and 7.2 assists including a dominant spell in April that included two triple-doubles in a gruelling schedule.

Meanwhile, Leonard broke several league assists records and handed out an incredible 11.3 per game to go with 15.7 points and a league-best 3.9 steals.

Winterburn – the youngest player in the lineup at 20 – led Leicester Riders to second place in the WBBL Championship with her all-round game, finishing with averages of 14.9 points, 7.0 rebounds and 6.2 assists.