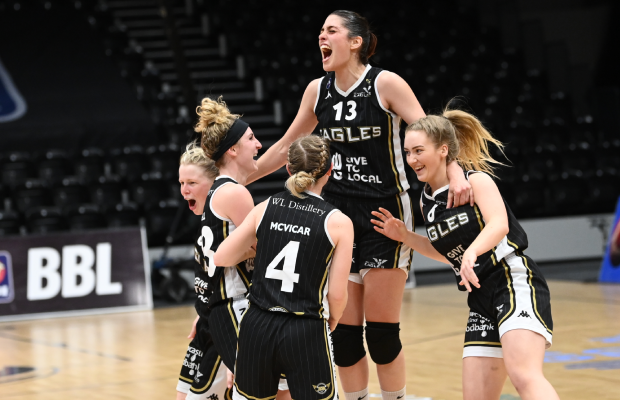 Newcastle Eagles pulled off the biggest upset in WBBL playoffs history as they knocked out Leicester Riders, while Sevenoaks Suns advanced.

The top-two seeds had never been beaten in the quarter-finals, but the Eagles held their nerve and set up a semi-final showdown with the league champions.

Here’s a recap of the two last eight ties:

The Suns extended their post-season winning run to 10 games with a 76-59 success over Oaklands. Irene Garrido-Perez top scored with 20 points on an efficient shooting night, while Cat Carr finished with 18 points, 10 rebounds and eight assists.

Oaklands were the last team to book their spot in the playoffs and made a bright start with early back-to-back scores from Amari Carter. Len Busch’s side moved ahead with a three from Carr and edged the opening period 20-16 before the Wolves levelled early in the second.

However, a 14-0 run that spanned nearly seven minutes proved pivotal as Sevenoaks established a double-digit cushion at the half, at 36-25. Greeta Uprus netted a second triple to bring her side back within single figures, but the Suns hit back with a 9-0 response and continued to pull away.

Newcastle Eagles created WBBL playoffs history as they stunned Leicester Riders for a 79-73 triumph at the Vertu Motors Arena. Chris Bunten’s side are the first seven-seed to win in the post-season as they came through a thrilling contest.

Abby Lowe was on fire throughout with a 26-point haul along with seven steals with the league’s leading scorer Alison Gorrell posting a 24-8-7 line in the win.

The Riders had jumped out to a 10-3 start, but Lowe hit two triples and had a huge block to spark a 10-2 run as the Eagles took the lead. Five points in a row from Maya Brewer restored Leicester’s advantage to help make it 19-17 after 10 minutes.

Lowe continued to put points on the board with an impact at both ends, moving to 16 points as part of a 14-4 burst to see Newcastle build an eight-point lead at 31-23. The gap was cut down to just three at the half with Brewer moving into double figures with another triple.

The Cup winners soon levelled, but the Eagles kept them at bay on their home floor to take a slender 57-54 advantage into the final quarter of a tense tussle. That lead quickly trebled as Lowe and Rachael Bland hit back-to-back triples, but the Riders had their own three-point flurry to respond.

Maddy McVicar hit a big three in an 8-0 run to make it 74-65 before another twist ensued with Leicester again closing the gap, but a clutch score from Lowe – shortly before fouling out – helped seal a historic win.