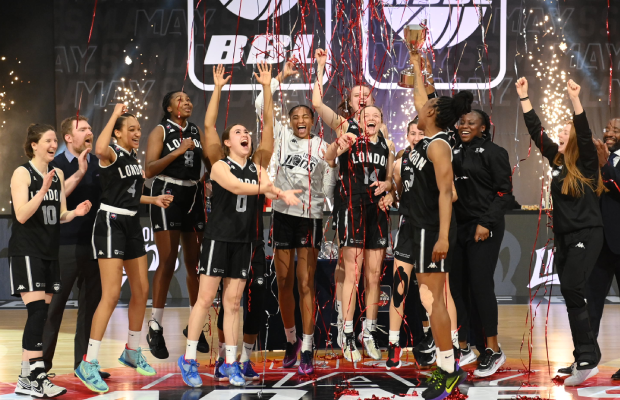 London Lions captured their second piece of silverware with an 93-71 victory over Newcastle Eagles in the 2021 WBBL playoffs final, in Leicester.

The Eagles showed no signs of early nerves with Alison Gorrell and Abby Lowe quickly onto the scoresheet. London took their first lead through a baseline mid-range jumpshot from Stephanie Umeh in the midst of an 8-0 run to open a 15-10 advantage.

Newcastle were 0-of-5 from outside in the opening 10 minutes and remained five behind at 21-16 with Gorrell already up to eight points for her side. Both defences were standing firm with Beckford-Norton in particularly having a major impact at both ends of the floor.

Maddy McVicar ended the baron opening from three-point range before Cassie Breen replied instantly with five straight. McVicar hit again before Abby Lowe joined in as Newcastle closed to within a single point.

Leonard then sparked an 11-2 run for the Lions as they established a double-digit advantage, though they would lead 45-37 going into the half-time break.

Back came the Eagles – just as they had done in previous rounds. The threes kept dropping to narrow the gap in a 9-2 burst before Gorrell’s and-1 tied the game at 51-51.

London hit back with the next 13 points, including a four-point play from Beckford-Norton, to restore control and they were up 69-55 heading into the final 10 minutes. The teams would go back and forth in the fourth quarter with the Eagles unable to make the run needed to close the gap.

Beckford-Norton kept her side on the front-foot and set the playoffs final record and Breen sparked a 9-2 run with five points in a row as they finished the season in style.