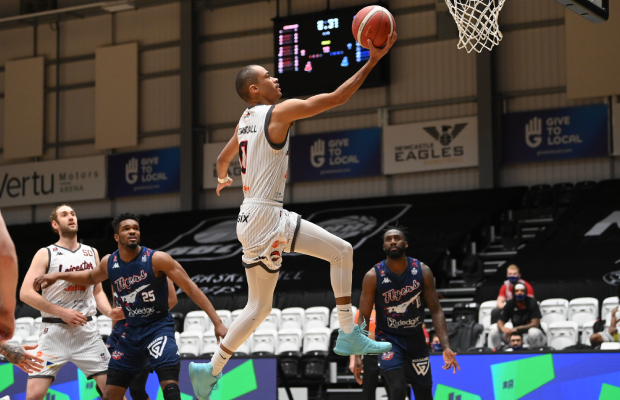 Leicester Riders and London Lions both took the first step towards the the semi-finals after opening up the BBL playoffs, on Monday.

The top-two seeds had contrasting victories in Newcastle as Leicester head into the second leg in Worcester on Wednesday with a commanding lead, while London still have work to do.

Here’s a recap of the quarter-finals first legs:

Leicester began their quest for another playoffs title with an emphatic 85-56 win over Bristol. Geno Crandall finished with 21 points, six rebounds and 10 assists with Mo Walker adding a season-high of 16 points.

The Flyers won by 26 points in their last meeting at the Morningside Arena in March, but this was back to business as usual for the league champions as they blew the game open in the second half.

Bristol were without GB guard Teddy Okereafor, but made a solid start to lead 10-13 and managed to keep things tight in the early stages with Eric Lockett – who finished with 16-9-7 – a focal point of the offence. A 9-2 run in the second saw the Riders threaten to pull away, though their lead was at three points at 33-30 at the break.

Leicester composed a 13-2 burst early in the third and this time they were able to pull away as Crandall and William Lee made things happen at both ends of the floor. Rob Paternostro’s side put up 32 points in a pivotal third period.

They continued to extend their advantage, whilst holding their opponents to just 11 points in the fourth with a sizeable gap at the halfway mark in the tie.

London will take a seven-point advantage into Wednesday’s second leg, despite leading by as many as 17 points against Cheshire. Dirk Williams’ late triple could prove decisive with the American netting 22 points, while Justin Robinson added 17 in the 73-66 victory.

Robinson hit 10 of London’s first 13 points in a scrappy start with the two-time league MVP adding his third three as part of an 8-0 run to lead 21-10 at the end of the first. Liggins went on a personal 7-0 run to take the lead out to 17 in the second before Cheshire finally hit their first shot from outside, at the ninth attempt. 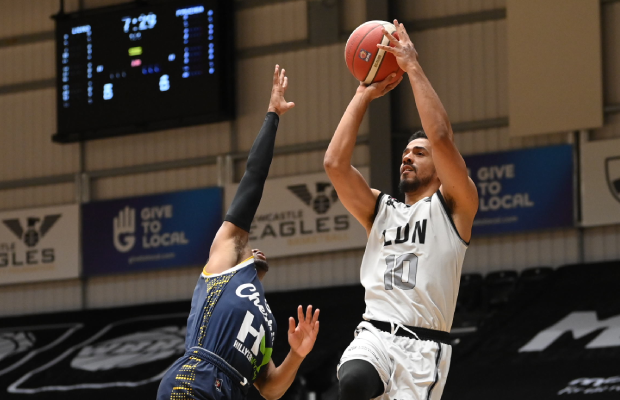 But their fortunes changed as they were able to contain their opponents with an 11-1 run to close within four – trailing 38-34 at half-time. A Williams three restored London’s double-digit cushion, but the Phoenix battled back again with a 10-2 spell in the final 4:21 of the third to get even closer at 51-49 with Matthew Bryan-Amaning beating the buzzer with a tip-in.

The turnaround was complete inside the final four minutes as Mike McCall capped a 7-0 burst to put his side 61-60 in front, just as Robinson picked up an injury. Jules Dang Akodo checked into the game for the first time and put London back ahead as a tense finish ensued.

The former GB Under-20 guard hit a big go-ahead three to make it 66-63 before Orlando Parker soon followed with a four-point play inside the final minute. Kahron Ross went 1-of-3 from the line and was punished as Williams hit a late three to seal London’s 13th straight win.

The quarter-finals continue on Tuesday when Newcastle meet Sheffield and Plymouth take on Worcester.