The final two quarter-finals remain in the balance as Newcastle Eagles and Plymouth Raiders secured two-point victories in contrasting fashion, on Tuesday evening.

The Eagles held off Sheffield having led by 17, while Plymouth recovered from 16 points down to deny Worcester.

Here’s a recap of the two quarter-finals first leg ties:

Newcastle survived a second-half fightback to overcome Sheffield for a narrow 79-77 victory. The Sharks had won the last two encounters on their opponents’ home floor and recovered from a 17-point deficit to take the lead in the fourth before coming up short down the stretch.

There was little between the two sides early with the Eagles 22-20 ahead at the end of the opening quarter with Darius Defoe moving to 11 points as the lead was cut in half. However, the Cup winners found points from elsewhere in a 17-6 spell that included a combined 12 points from Justin Gordon and Cortez Edwards to help them into a 52-40 advantage. 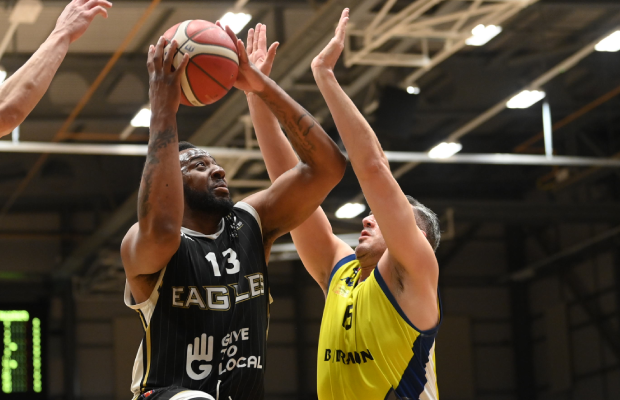 The lead was out to 17 following an and-1 from Louis Sayers, but the Sharks began to find a rhthm at both ends as a 7-2 run was followed by a 15-2 spell across quarters to cut the gap to two at 70-68 inside the fourth. Nicholas Lewis tied the game before Antwon Lillard put them ahead at 75-73.

The reliable Eagles duo of Rahmon Fletcher and Defoe restored the Eagles lead and they would need a pair of free throws from the 36-year-old veteran to seal the victory and finish with 18 points.

Gordon top scored with 20 points with Fletcher also adding 18 points to nine assists, while Jeremy Hemsley had 21 in defeat for the Sharks.

Plymouth defeated Worcester for the fifth time this season after overcoming a slow start to win 84-82. The third-seeds had a 28-point haul from Rickey McGill in a full 40-minute effort with Jordan Williams posting 12 points, 10 rebounds and seven assists for the Wolves.

The Wolves used a 12-0 run to take control and established their position to lead 30-14 after 10 minutes. Plymouth hit back with an 18-5 start to the second quarter as Ryan Beisty and Elvisi Dusha provided the spark off the bench, and they tied the game at 40-40 on a three from Rickey McGill.

Elijah Burns had a huge and-1 dunk to put Worcester back ahead and they led 48-46 at the interval. Another strong spell followed in the third as the double-digit cushion was restored at 65-54, though the Raiders refused to let the game get out of reach and were soon back within four.

Ashley Hamilton was ejected with 5:43 remaining with a second technical in the fourth, but the Raiders rallied down the stretch with an 11-0 run – started by six points from McGill and five in a row from Mike Morsell to make it 82-78 with 2:05 left, and they were able to hold on.

The quarter-finals continue on Wednesday and Thursday with the second legs, in Worcester.