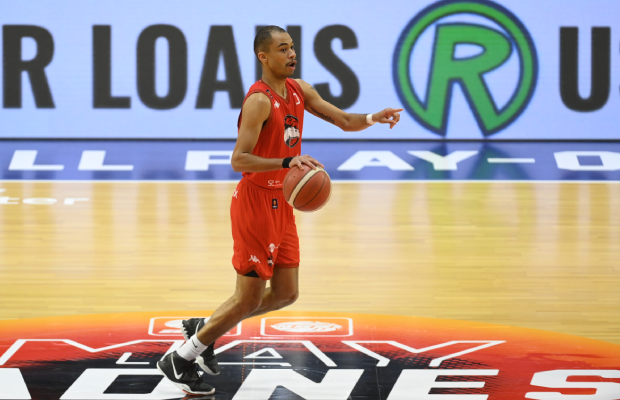 Leicester Riders guard Geno Crandall has won the Player of the Year in the Basketball Journalists Association’s annual awards for the 2020-21 season.

The American put on a show for fans as he led Riders to the British Basketball League title, averaging 15.9 points, 7.8 assists and 5.7 assists as the motor to the Leicester sides offence.

“It’s an honour to be voted player of the year by the BJA,” Crandall commented.

“Obviously this season has been different to any other we’ve experienced before and so for myself and my team to have been able to capture some success and consistency in this unique season has been very rewarding for us all.

“Now hopefully we can continue those successful ways heading into the last
week of the Playoffs.”

Newcastle Eagles veteran Rahmon Fletcher – who led the league in scoring and assists – finished second in the voting with London Lions’ DeAndre Liggins in third.

Leicester Riders also came out on top with the BJA Coach of the Year award, as Rob Paternostro claimed the crown, his fourth in ten years.

In a pre-season that was dominated by the London Lions’ European odyssey, Paternostro quietly enlisted a squad that ultimately ended with a title-winning 24-6 record.

“I’m so proud of our players and back room staff, it was a difficult season in so many ways, but our team were focused throughout the campaign,” Paternostro
said.

“We played some really good basketball on both ends of the floor and were tested nightly.

“There were so many close games, more than I can ever remember and I’m proud of the way the guys stuck together and were able to have the type of record we had in such a challenging league.”

After leading Plymouth Raiders to third place, their joint best finish in the BBL, Paul James was second in the voting with London Lions coach, Vince Macaulay in third.

Plymouth Raiders’ Ashley Hamilton wins the Pete Jacques Award for Best British Player in the BBL due to his outstanding contribution to the team in all facets of the game.

Hamilton averaged 16.3 points and 6.8 rebounds as he led Plymouth to the BBL Trophy final and the Playoff semi-finals.

The WBBL Player of the Year was Kennedy Leonard, whilst the Syd Lipski International Award for top British performer on the global stage goes to Reyer Venezia’s Temi Fagbenle, with Karlie Samuelson in second and Ovie Soko in third.