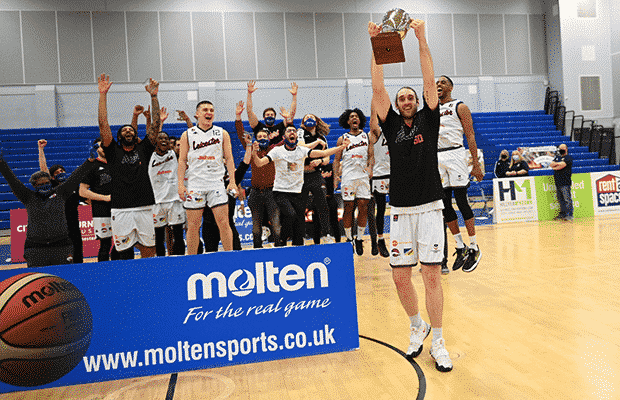 Leicester Riders have secured their fifth BBL Championship title after they defeated Cheshire Phoenix in their final league game, on Sunday evening.

Rob Paternostro’s side seal the regular season crown with their 24-6 record now insurmountable with London Lions improving to 21-7 earlier in the day with two games still remaining on their schedule.

“It feels amazing,” Paternostro – who won his 14th title – said after the game. “I think that of all the trophies in this league, this is special because everybody has the same draw, everybody plays the same amount of games and it’s over such a long period of time that the consistency, work ethic, and the ability to stay focused is important and I think that our guys were the best at that all year.”

Leicester had the chance to clinch the title in midweek, but suffered an 86-81 defeat to London at the Copper Box, but bounced back with a 93-67 victory over Glasgow Rocks to move on the brink.

The Riders won 14 of their first 15 games to take control in top spot at the halfway mark before suffering back-to-back defeats at the buzzer away at Worcester and Cheshire. They followed with wins over Newcastle and London as part of a five-game streak to move to 19-3.

Geno Crandall led the Riders with 16.0 points along with 7.8 assists per game with five other players in double figures in scoring, including Mustapha Heron who was a mid-season addition following an injury to Zack Jackson.

“It’s an awesome feeling,” Crandall said. “With all the work we put into this year, all the craziness going on in the world outside of basketball and in basketball with teams having postponements and all that, it’s really rewarding to get to the end of the tunnel as far as the regular season goes and be the team that came out on top in first.

“It’s an awesome feeling and I’m really excited for all the guys that got to experience winning a championship.”

Their first league title was won in the 2012-13 season before a run of three successive years as champions from 2015-18 with British duo Jamell Anderson and Conner Washington adding to their collection of silverware at the club. Riders have now won 16 titles.

“It’s great, so great,” Leicester’s Darien Nelson-Henry added. “We’ve been working for it for so long and it was the craziest, wildest season with so much uncertainty so to be able to pull it out with the guys and be able to weather the storm with all the madness that is COVID, it feels amazing, amazing.”

Leicester are also the three-time defending champions of the playoffs and will take on the unconfirmed eighth seeds in the two-legged quarter-final.