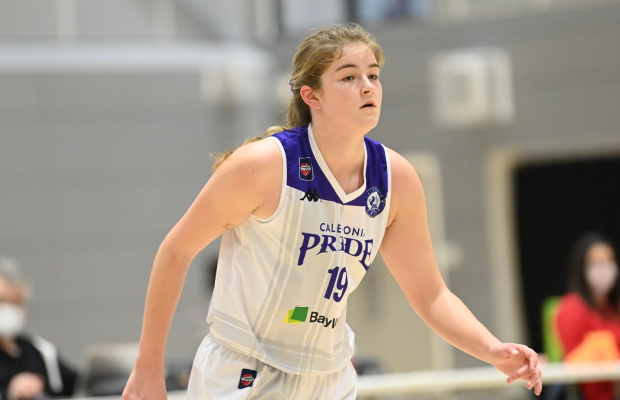 Ella Doherty will head Stateside later this summer having continued to make strides on the court after completing a third year in the WBBL.

The 2003-born guard earned a scholarship at NCAA Division 1 school Toledo and was regarded as one of the top performing young players in the league this season.

Doherty averaged 9.9 points per game on a youthful Caledonia Pride roster as they received plaudits for the way they battled and competed throughout the campaign, despite finishing bottom of the standings.

“It was obviously challenging,” Doherty told Hoopsfix. “With all the restrictions in place and having to wait until January to play our first game.

“But we said it since the start and went into every practice and game with the same mindset of it being such a privilege to be one of the few teams to actually be able to play, and we were so thankful for that.

“I think we did well competing this season and showed in spells we can really compete with top teams in the league.”

Doherty enjoyed a breakout game with a career-high of 25 points against London Lions as Caledonia came close to an upset in an eventual 90-96 defeat.

And, the GB junior international relished those opportunities of coming up against far more experienced opposition with the chance to grow.

“Competing against the top players in Britain has been challenging at times, especially being so young,” she admitted. “But it’s also been a great experience to learn.

“I am very thankful for the opportunity to do so. I have learnt so much from the more experienced players both on and off the court.

“Even just compared to last season, I feel like I have grown lots as a player. My coaches are always pushing and teaching me and always believed in me which I am so thankful for.”

Doherty made her last appearance for Caledonia, alongside Pollyanna Storie – who will head to Canada – as they took on the recently crowned league champions Sevenoaks Suns in their final league game.

As Ella Doherty moves on from Pride to take her education and basketball in a new direction, we look back on 3 seasons packed with highlights and a 20/21 campaign which developed to be her best:

The result almost didn’t matter. One final opportunity to play together before venturing onto a new journey after three years, and another chance to compete with the best.

“The final game was really enjoyable,” Doherty concludes. “We had a really close team this year and everyone is always there for each other and supporting each other so it’s always enjoyable to be able to be on court with everyone

“I’m sad to leave the team, but I am very excited for what’s to come next. The family atmosphere between both the team and the coaches is something that really excites me about Toledo.”