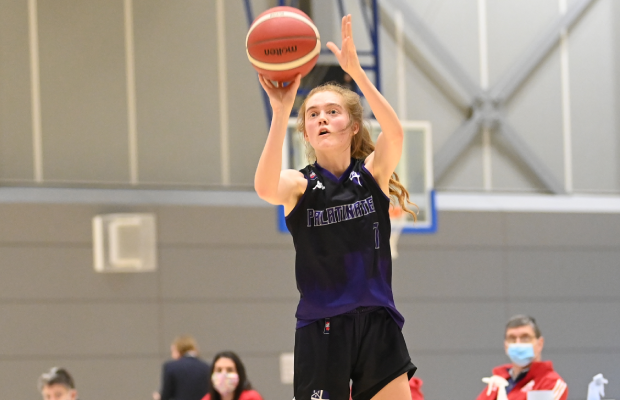 Katie Bennett headed north to mark her return from a lengthy injury absence and take the next step in her young WBBL career.

The 2001-born guard joined Durham Palatinates and their delayed start to the current campaign meaning it had been two years since Bennett was last on court, having ruptured the ACL in her knee during her time at Sevenoaks Suns.

It was during the Suns’ perfect 2018-19 WBBL Championship season that Bennett earned minutes at the top level and netted a best of 11 points – against Durham – as a 17-year-old, whilst enjoying junior success after also previously helping Southend Swifts to an Under-16 National title alongside Charlotte Ellmore, in 2016.

Any injury absence is obviously tough for a player and the longer that gap grows, the tougher the process of recovery becomes as doubts also creep in.

“It has felt like I’ve skipped the bridge between playing at junior level and now WBBL,” Bennett told Hoopsfix. “I’ve had a long and hard road to recovery, but I’m lucky enough to have a great support network around me, who have helped me finally step back on court.

“I have found the mental game the toughest side of recovering and I’m still gaining confidence as I go, working my way to being back to where I was and then even better than before.”

Bennett receives a jersey from Melita Emanuel-Carr after missing out on playing at the HASC.

Bennett has taken on the additional responsibility in a new starting capacity for the Palatinates as part of a younger squad that does not go as deep as in previous years in which the club reached three finals in two years.

There have been ups and downs in a difficult campaign with averages of 5.9 points, 2.9 rebounds and 3.1 assists per game as Bennett embraces the challenge with an appreciation of being back and a desire to keep getting better.

“I’m proud to have a bigger role in the WBBL, but I know I have so much more to give,” she stated.

“This season has been about regaining my confidence and self-belief within playing a position I’m not experienced in, surrounded by players much stronger than me so I’m learning a lot along the way.

“I feel privileged to be playing this season and I’m loving being back, but it’s been a real challenge both mentally and physically.”

Sometimes winning isn’t everything. Just being able to play this season in the middle of a pandemic has felt like a win for some. Durham had to wait until their ninth league encounter to break their losing run and they doubled their win tally last week with a five-point derby success over Newcastle Eagles.

Claire Paxton fired in a 34-point haul in the win, while Kara Elderkin produced a typically all-round display against her former side with Durham’s dynamic duo vital components of their roster to support their younger counterparts.

“It was a tough fight against Newcastle,” Bennett said of their most recent win. “We knew it was a winnable game and it was a case of performing on the day. We had a slow start but bounced back and kept momentum for the rest of the quarters.

“It has given us confidence in what we’re capable of and shown us how much we love that winning feeling.

“Claire and Kara have been a massive asset to our squad with their experience and versatility. They really are the core to our team. They’re such talented players but also great people with great mindsets.”

Bennett is not unfamiliar with having that level of experience and versatility to call upon having been part of that aforementioned title-winning side at Sevenoaks. The level of young players is continuing to rise each year around the WBBL and teams are providing a platform for the next generation with Bennett benefitting from her own opportunity.

“I loved having so many experienced women around me at Sevenoaks,” she recalled. “All of whom challenged me, coached me, believed in me and made me a better person and player.

“I’m very thankful for my two years there – it helped me think more ‘smartly’ about the game and showed me how playing with confidence completely changes the decision aspect of basketball.”

And, while Sevenoaks remain on course for another league title through the efforts of their talented contingent, Bennett hopes to become a household name in the WBBL in her own right with a look towards what the future may hold.

“I’ve always played basketball to enjoy it and see where it takes me,” she explained. “There are so many talented, experienced players in the league and I’d like to build up my experience and skillset and maybe make a bit more of a name for myself.

“If the U20 Euros go ahead this summer, I would love to have the opportunity to play for GB again.” A season that many feared would not see a conclusion, now has the finishing line in sight with Durham currently rooted to the bottom of the league standings with a 2-14 record, alongside Caledonia Pride.

The playoffs are still mathematically within reach with victories paramount in upcoming encounters with Newcastle and Oaklands Wolves as part of a final four-game stretch, whilst likely needing results to go their way elsewhere in order to become part of the coveted top eight.

“We have complete faith that we are capable of winning these games,” concluded Bennett. “We need to stay focused on our goals as a team and be ready to perform.

“We’ve come a long way since the beginning of the season, and it would be great to end on a high which I truly think we deserve.”